(QCOSTARICA) “I cannot think of a better country to reach the new normal.” This is how Costa Rican David Gutiérrez Swanson described his arrival in Costa Rica on Monday from Spain with his family and even his dog Cucho on the first flight after the reopening of airports in the country.

In an interview with La Nacion, Gutiérrez, asked what is it like to fly for 11 hours at an altitude of 8 kilometers over hundreds and hundreds of kilometers of ocean with a mask over your face at all times for fear of infection? said, “It was very calm”.

This family from Santa Ana has lived in Madrid for three years due to Gutiérrez’s work as a lawyer at the legal services firm BLP.

His wife, Carolina Ortiz Odio, and their sons Felipe and Alberto, 10 and 11 years old, respectively, came with him, as well as the Jack Russell terrier whose size allowed it to travel in the cabin.

“We always come on vacation and we have to be in solidarity with our country and the tourism that requires so much help. How are we going to go on vacation to another country when we can do it in our own country and show confidence?” Gutiérrez declared.

Together they navigated new routines and received unexpected gifts that, which, despite everything, left them with the impression that the innovations adopted in Costa Rica do inspire confidence and give security to those who enter and to the rest of the population.

“Iberia was very professional detailing everything and allowing us to fill out forms online and the same for foreign travelers, who were warned about the requirements,” said Gutiérrez, who, with his family, will have to respect the 14-day isolation order for all returning Costa Ricans and residents.

One day before the flight, he recalled, he got a message from Iberia, informing that their carryon would be placed in the cargo hold at no extra charge. This detail allowed the family to avoid the typical boarding movements of securing carry on. “That seemed logical to me (…),” said Gutiérrez.

At the Madrid terminal, the use of a mask was mandatory from the entrance to the exit. At the time of boarding, travelers were called by rows of seats rather than groups; starting from the back to the front rows and always with great distance between people.

“It seems to me that the process shows or generates a lot of confidence. Of course, it is uncomfortable and there are new requirements, but as a Costa Rican vacationer, or if I were a foreigner on a trip, I would come more calmly to a country that asks for these requirements, than to another where none of these provisions matter. David Gutiérrez, Costa Rican residing in Madrid

Once inside the cabin, everyone began, with disinfecting wipes in hand, a painstaking cleaning job in the area where they would travel 11 hours.

All cleaned tables, armrests, screens and everything they would have contact with. All except Cucho who remained oblivious to it all.

“At all times, the Iberia staff was on top of everyone wearing their mask. That was what was most cared for. Food service was something else. (…) it was packaged food with a label that said it had been sanitized. That gives you calm,” he said.

A: Not really. We did not feel any uneasiness, rather a lot of confidence; nor did we see scenes of hysteria or anger, nor did anyone become foolish. Everyone was with a correct attitude. A lot of novelty things we have to face.

Q: How were the new novelties on such a long journey?

A: I’m not going to play intrepid either, but we and neighbors (fellow passengers) on the plane were calmly learning new routines. There was always calm and nobody said “I want hot lasagna instead of this sandwich.” I would say that we all flew recognizing that it was so for everyone’s safety.

Upon arrival in Costa Rica, other novelties imposed more routines. 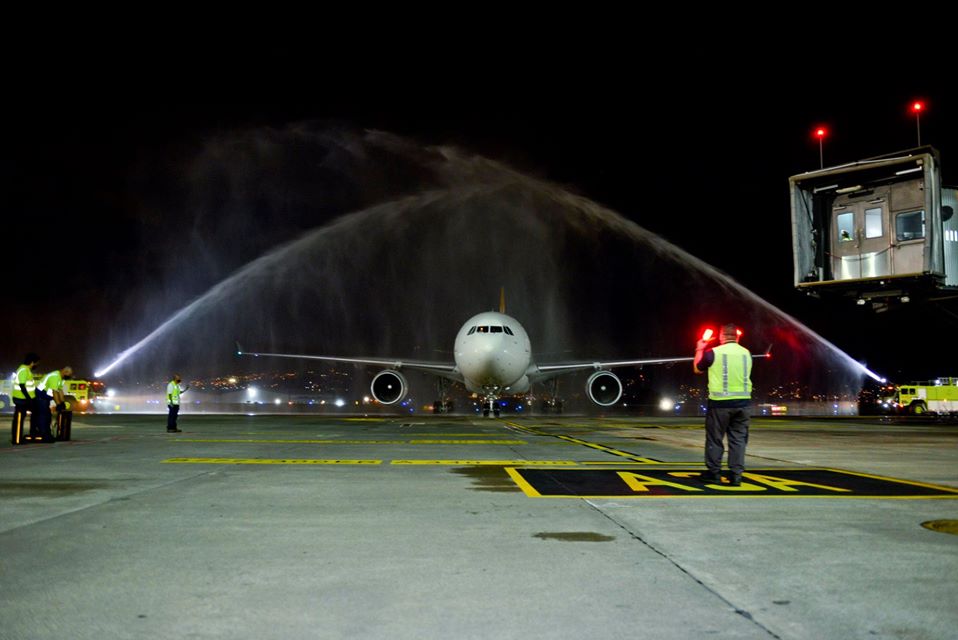 Firefighters from Costa Rica received the plane and accompanied it to the gate where they launched jets of water on the newly arrived plane in a kind of welcome christening.

The deplaning of passengers was again by rows, this time from front to back, which avoided “that confusion and mess that takes place in the center of the cabin,” said Gutiérrez in reference to the proverbial and unalterable of some travelers’ habit of standing up as sound as the plane reaches the gates and the sound of the “ding” that seat belts can be removed.

Carrying Cucho on his arm in his travel cage, Gutiérrez and his family walked towards immigration when they ran into staff from the Costa Rican Tourism Institute (ICT) who had a surprise for them.

And it was not only that Minister Gustavo Segura was there welcoming the passengers, but the masks with the ‘esencial’ Costa Rica printed on canvas: the multicolored lines of our typical carts declared a National Symbol in 1988 as a tribute to the culture of work, sacrifice and perseverance of the Costa Rican people.

The label on the sachets containing the masks read: “This is our essence: to be good hosts. Welcome to Costa Rica”.

“It was a very big detail, there were even for children and everything,” said the father, referring to the nuances and typical drawings characteristic of one of the national symbols of Costa Rica.

“Foreigner always tells you that the Costa Rican is good people, and makes you think about it, but it is true, we Costa Ricans are good people and warm. One perceives it when treating people of other nationalities. Those people who came to receive us were really warm; almost loving and made us all a very moving arrival,” he recalled.