Supreme Court Chief Justice, Paulino Mora, died Sunday night at the age of 68. His death was a surprise to many after being admitted to hospital last Monday. 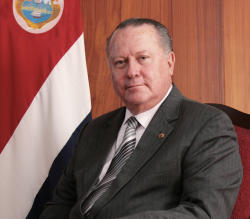 Mora was Minister of Justice during the first  Oscar Arias Sánchez (1986-1989). Following he was elected magistrate to the Sala Constitucional, the country’s Constitutional Court and in 1999, elected as Chief Justice of the Supreme Court

During his tenure at the Poder Judicial (Justice), he was a criminal judge in Limón and and chief justice of the Sala Tercerra.

Mora graduated from Universidad de Costa Rica (UCR) and earned a doctorate in law from the Universidad Complutense de Madrid.