The Two Meteorites In The History of Costa Rica 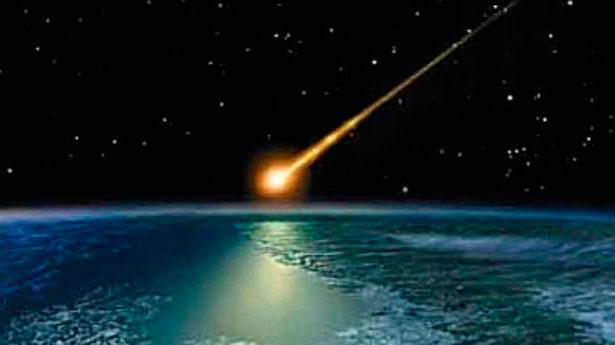 During the great earthquake of Cartago in 1910, there were reports of a meteor streaking across the skies of Costa Rica. Historians say that the night of May 4, 1910, while the “vieja metrópoli”(old metropolis as Cartago is often referred to) was rocked by the great earthquake, a sign in the sky further instilled fear.

Reports say a fireball crossed the night sky, from side to side. And became forever part of that fateful day in Cartgao, when more than 500 people died from the quake, although no exac figure was ever available.

BY all accounts, the meteor crossed the sky from east to west and was confirmed by a the crew of a German steamship that at the time was in the Gulf of Nicoya, on the Pacific coast.

The Cartago meteor was the second.

Proof of that meteior is a fragment weighing only 3 grams that is possession of the Geología de la Universidad de Costa Rica (UCR) – Geology department of the University of Costa Rica.

That meteorite fell in the province of Heredia. Reports of the day indicate that it was seen over San José as a great fireball that streaked across the sky.

In a check of the web records lists for cCosta Rica lists only one meteorite record, the Heredia. This is because the Cartago meteorite never impacted.

According to the Meteriological Society, the Heredia meteor was classed an “H5:.

“An ordinary chondrite from the H group that is petrologic type 5.”

The highlighted words are defined as follows:

Ordinary chondrite: A major class of chondrites, distinguished by sub-solar Mg/Si and refractory/Si ratios, oxygen isotope compositions that plot above the terrestrial fractionation line, and a large volume percentage of chondrules, with only 10-15 vol% fine-grained matrix.

H group: The high-iron (H) chemical group of ordinary chondrites, distinguished by their high siderophile element content, relatively small chondrules (~0.3 mm), and oxygen isotope compositions that are closer to the terrestrial fractionation line than those of other ordinary chondrites.

Type 5: Designates chondrites that have been metamorphosed under conditions sufficient to homogenize olivine and pyroxene, convert all low-Ca pyroxene to orthopyroxene, cause the growth of various secondary minerals, and blur chondrule outlines.

QCOSTARICA - Panasonic announced that it will invest US$10 million dollars in the expansion of its plant in Costa Rica, in order to move...
Today Costa Rica

QCOSTARICA - Costa Rica's banana growers reached an export record in 2020, despite the impact of the pandemic, shipping fruit in new markets and...
Entertainment

The filming of the second season of the reality show “ReverseD” on the Discovery Channel officially began last Sunday, February 21, in Atenas, in...
Vaccine

QCOSTARICA - A new batch of vaccines of 92,430 doses, and the largest received since December against covid-19, arrived Tuesday, as part of the...
Front Page

QCOSTARICA - This Semana Santa, if the number of daily new cases continues on its current trend, we will not see the harsh sanitary...
Economy

(BNamericas) - In order to strengthen the well-being of the population and the sustainable development of the country, Costa Rica has been incorporated a...
Trends

The blackjack game is associated with excitement and joy. The players experience great enthusiasm while playing the game because of its great rewards for...