In the U.S. a cities and states publish a “john list” of men convicted of paying for sex in their community. In Costa Rica we have a different kind of list, one published by the Consejo de Seguridad Vial (COSEVI) naming publicly the names of owners of vehicles with traffic violations.

Such a list, a 32 page insert appeared in Thursday’s La Nacion, listing all the traffic offenders between August 1, 2013 and September 30, 2013. 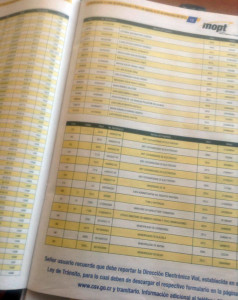 The list includes the vehicle license plate number, the name of the registered owner of the vehicle (not necessarily the driver), the date and of the ticket and the corresponding fine level. With that  information, anyone can access the COSEVI website and learn the details of the infraction.

The COSEVI, a division of the Ministry of Transport, says the publication of the list is in accordance with the Ley de Transito to notify the owners of vehicles with outstanding traffic violations. Earlier this year, the COSEVI began requesting that all drivers submit their email information to be used for notifications.

Despite the form is mandatory, the COSEVI’s ability to enforce that has been challenging, forcing it to spend resources in compiling a list and the publishing it in the local media, this act giving the ticket validity.

With the publication today, the COSEVI has fulfilled the legal requirement of notification and vehicle owners (on the list) have have ten working days to appeal the ticket and/or pay the amount of the ticket before incurring additional costs suchs as fines, interest and late fees.

The listing is by vehicle type and license plate number. We could not find a virtual publication of the list, not on the COSEVI, nor the MOPT websites.

- Advertisement -
Paying the bills
Previous articleShopping In The Mercado Central de San José
Next article[BLOG] It Was Too Good To Be True!