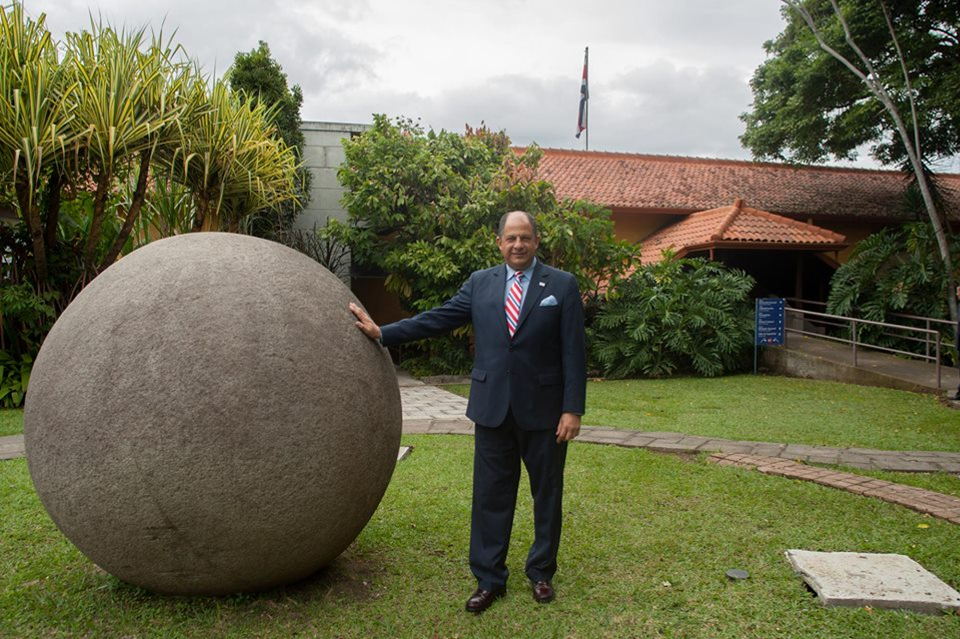 Precolumbian Chiefdom Settlements  with Stone Spheres of the Diquis includes four  archaeological sites located in the Diquis Delta in southern Costa Rica, which are considered unique examples of the complex social, economic and political systems of the  period between 500-1500  AD.  They contain artificial mounds, paved areas, burial sites and, most significantly, a collection of stone spheres, between 0.7m and 2.57m in diameter, whose meaning, use and production remain largely a mystery. The spheres are distinctive for their perfection, their number, size and density, and their placement in their original locations. Their preservation from the looting that befell the vast majority of archeological sites in Costa Rica has been attributed to the thick layers of sediment that kept them buried for centuries.

COSTA RICA NEWS – Four archaeological sites containing the mysterious stone spheres, ranging in size from cannon ball to higher than a tall man, are now part of the United Nation’s World Heritage (UNESCO). In this elite list are some of the globe’s great treasures, natural and man made, including Costa Rica’s Cocos Island.

Little is known about the spheres discovered sitting atop the ground or partly buried by natural erosion, except that they were here when Columbus brought his ships into a bay in Costa Rica. The rest is conjecture, their purpose and manner of crafting the subject of theory.

The announcement was made at 1:05 a.m. Costa Rican time Monday by the Heritage Committee meeting in Qatar by delegates from Colombia, Germany, Jamaica, The Philippines, Turkey, Croatia, Algeria, Vietnam and India.

Four sites were named in this country– Fincas 6, Batambal, Grijalba and El Silencio. Good luck finding these places on any map; they are mostly remote. Many of the balls were removed from their original location, much to the dismay of archaeologists, during the 20th century by persons with more ego than sense.

Up until a few years ago, one was in a front yard on Paseo Colon in San José, and others moved to be mere frivolous lawn ornaments in the Central Valley until the National Museum began gathering them up and placing them in the museum where, at least, they can be enjoyed by tourists and residents.

But they are true mysteries and urban myths of extra terrestrials and such have grown up around them. For one thing, they are nearly perfect spheres and how they could be fabricated of stone with primitive instruments is unknown.

National Geographic even suggested that they might not be man-made at all, but a natural phenomenon made by a rare condition of volcanic action that finally spit them great distances, distributing them like randomly sited mortar shells throughout a wide area.

The four sites are in the Diquis area in the mountainous southern zone of the country. “The Pre-Columbian location of the stone spheres in the Diquís illustrate the complexity of the political, social and productive structure of the Pre-Columbian societal hierarchies,” UNESCO (the cultural arm of the United Nations) noted.

Newly installed Culture Minister Elizabeth Fonseca called the naming a “historical act.” The minister noted that in the past Unesco has paid attention mostly to “the great monuments constructed in various parts of the world such as the pyramids or the Parthenon.

But now, she noted, the world organization has turned to the indigenous societies of the tropics. But the stones are still something unique — Panama has, for example, the post-Columbian defenses built by the Spaniards to protect Porto Bello from the incursions of pirates (read British).

The removal of smaller stone spheres points up the benefit of declaring them a world heritage — the country is honor-bound to protect them from commercial exploitation or private collection and if it is unable to, can call on richer sources to help in this endeavor.

The Costa Rican representative to the heritage group, archaeologist Francisco Corrales, noted that UNESCO and the heritage group focused on the spheres as an example of artistic traditions and capacities of pre-Columbian societies.

Costa Rica has three other heritage sites but they are all natural — beside Cocos Island, there are the Guanacaste Conservation Area and the La Amistad Park, the latter shared with Panama. As President Luis Guillermo Solis said, “An archaeological cultural heritage of a people is fundamental … an undeniable basis of its memory, a mirror in which we can see the grandeur of our past.”