QCOSTARICA – Almost three fourths (72%) of the credit cards circulating in the country have interest rates from between 40% and 50%, while the default interest varies from 24% to 65%.

The results are from a stud by the Ministry of Economy, Industry and Trade (Ministerio de Economía Industria y Comercio – MEIC), through the Directorate of Economic and Market Research. 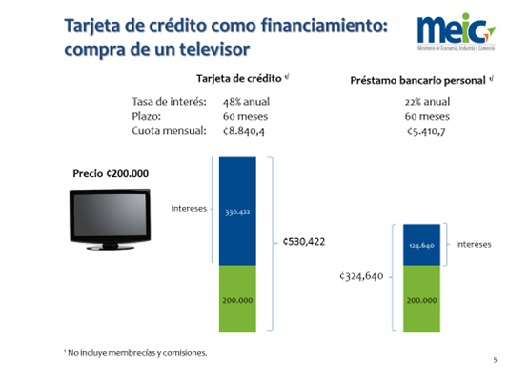 Thus, consumers would be paying 2.6 times the price of the item.

The MEIC study reveals that credit card debt has increased 7.25% compared to the previous study, and delinquencies from one to 90 days is 7, 41% and greater than 90 days is 4.27%.

The study found that

127 debit cards do not charge for membership (34%), while the other 247 others (66%) charged amount of between ¢ 400 and US$10 annually.
- Advertisement -
In addition, eight financial institutions charge for use of their own ATMs after a number of free withdrawals, while six of these issuers allow free of charge debit cards between 4 and 12 transactions. If the card holder exceeds free withdrawals must pay an amount that varies between a range of US$0.15 to US$1.25 per transaction.

Editor’s Note: When it comes to foreign debit cards used on local (Costa Rica) ATMs, most banks and financial institutions will charge a fee that can range from ¢500 colones to ¢1.500 or more (ie Scotiabank), plus fees charged by the issuing bank.

Desperate for vaccines in Costa Rica!

QCOSTARICA - In Costa Rica, the urgency of getting...