With days to go to vote day, Costa Rica’s presidential candidates and political parties are focusing their political campaigns on the a second round election. 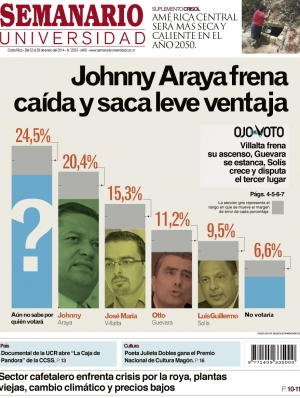 All the polls indicate that no one candidate will obtain the 40% required vote on February 2, when the top two candidates on February 2 face the people again on April 6.

Also, candidates like PLN’s, Johnny Araya and Frente Amplio’s, Jose Maria Villalta, have been public about willing to include representatives of other parties in an eventual government, if the voting goes to a second round.

On Wednesday, Villalta clarified the possibility of incorporating in his eventual administration persons of other parties who share the vision of the Frente Amplio, with an honest career and knowledge in the different areas of government.

Villalta also recognized that his possible opponent in a second round to be Araya.

According to the latest poll this week by the Semanario Universidad, Araya is in first place with 20.4% of the decided vote, followed by Villalta with 15.3%, Otto Guevara with 11.2% and surprising, Luis Guillermo Solís of the PAC, almost doubling his previous support, now at 9.5%. The majority of the voters in the Semanario poll – 24.5% – are undecided.

Polls earlier this month by CID-Gallop and Unimer, put Villalta in front, followed by Araya and Guevara.