COVID-19 In Costa Rica: Curve of contagions takes another jump with 86 new cases

The main focus of the high number of cases is on producing and packing companies in the Northern Zone. "The businessman who fails to align and meet these requirements will not be able to operate in the country," says Minister of Health.

(QCOSTARICA) 86 new cases of COVID-19 in the country, the Minister of Health, Daniel Salas, reported today, Wednesday, June 10, at the daily press conference.

The figure is the highest recorded since March, when the coronavirus was detected and is part of the increasing curve of recent days. The highest before today was on Sunday, June 7, with 55 new cases in a single day.

With this increase, the total number of infections since March reaches 1,461, of which 1,112 are Costa Rican, and 349 are foreigners.

These data were the prologue to new announcements by the Health Minister, Daniel Salas, who reported on the intervention plan in production and packing companies in the northern zone. Failure for companies to implement measures to reduce contagion so could result in firms put out of business (as in closed).

The measure was decided after 49 cases had been detected in two of these plants from on June 1 to date. According to the Minister, the contagion came from relatives of company officials then they moved to the workers.

“On the 49 cases, I add, the immigration status is investigated,” added Dr. Salas.

“We are going to integrate them (to the companies) in a more absolute way in a joint health intervention plan in the affected agricultural sector.

“We are going to apply this plan in a very rigorous way, the idea is that the company that does not align itself will not be able to operate, we are defending and categorically protecting the health of the population and taking into account that increased risk in that sector.

“We have already indicated, the businessman who fails to align himself and meet these requirements will not be able to operate in the country, he is part of that social and health responsibility with the rest,” warned Minister Salas.

To that warning, the Minister of Agriculture, Renato Alvarado,  assured that from the beginning of the pandemic, the agricultural sector developed protocols to work permanently and that food production chains did not stop. The problem is that there was relaxation in the application of the measures.

“In the cassava (yucca) harvesting, we have had problems in some of the plants. New cases have started to emerge, as a result of contamination that we are having in the communities and the plants.

“For this, we are going to develop this joint plan, where Health, Ministry of Agriculture (MAG), the Ministry of Public Security, and all the others will be going to the plants directly and carry out the relevant inspections.

“We have already talked with the businessmen of the area so that they actively and forcefully join this containment of contamination (…) we will be very emphatic with those who do not comply with the requirements and health protocols, we will act in a manner joint and very severe,” he said.

For the time being, the intervention involved stopping the production process for three days to disinfect and sample all workers, which would determine if they can return to work.

“We know that nobody does it intentionally, they are highly regulated plants with workers enrolled in the Caja (Costa Rican Social Security), and they complied with their protocols, but it was also due to contamination by family members,” said the MAG minister.

However, he acknowledged that there are “unscrupulous” who hire migrants who come from neighboring countries illegally.

The important thing, he declared, is that businessmen and citizens work together to achieve containment and guarantee that the people who are hired have roots and permits to work in the country.

According to Salas, when talking about intervention, it is about verifying compliance with measures such as the use of protective equipment, where to wash hands, alcohol gel available, adequate ventilation conditions.

“Now we are going to make a type of productive bubble, where we are going to minimize the contacts they may have outside the company, if that is not achieved, they will not be able to operate,” he reiterated.

We need to do better

“Costa Rica has been doing things very well and right now we have to do even better. We can economically close everything, but if the health care is unbalanced, there is no way to get out of this from an economic point of view,” said Health Minister Daniel Salas.

The new record in infections was preceded this Wednesday with the confirmation of death number 12 related to this disease, caused by the new respiratory virus SARS-CoV-2.

It was a 58-year-old woman who died in Hospital México, where she remained for 70 days. The patient had risk factors and at the time of death she had already tested negative for covid-19.

Alexánder Solís, president of the National Emergency Commision (Comisión Nacional de Emergencias – CNE), explained that “extended preventive” measures are expanded to cover areas of high contagion, the measures are similar to those applied during Semana Santa, with vehicular restrictions from 5:00 pm to 5:00 am – no vehicles, except for the known exemptions can be on the road and limited hours of operation of stores.

Daniel Salas said this Wednesday that the possible return to classes after July 13 (when half-year vacations end), “is not a broad return”, a subject on which he has already discussed with the Ministry of Public Education.

In fact, he announced that there will be no return to classes in areas that remain on orange alert, precisely, because there is a greater circulation of the virus.

“We are still analyzing, next week I have a meeting, ”he said.

As mentioned earlier, the total number of cases since the first case of the COVID-19 in March is now 1461, of which 1,112 are Costa Rican and 349 foreigners.

The number of active cases is now 727, with 12 deaths recorded.

Hospitalized are 20 patients, of whom 3 are in intenvise care. 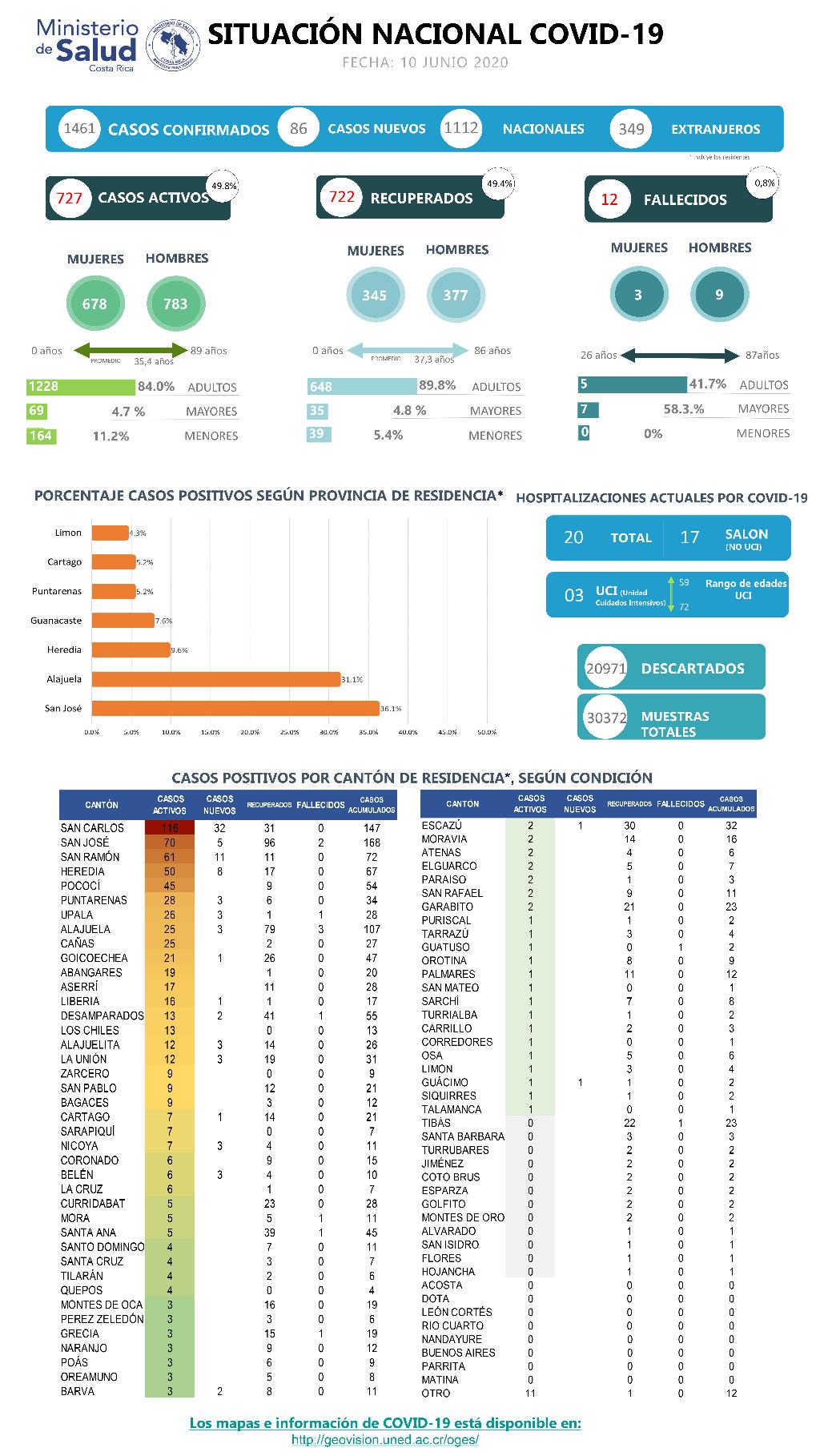