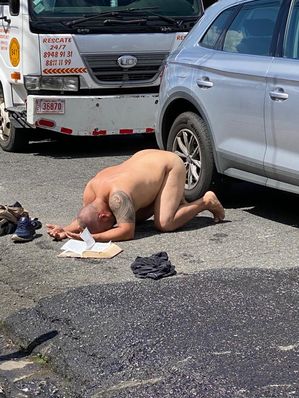 [QH] In plain light of day Thursday, in the area of Paso Ancho, San Jose, the driver of one the vehicles involved in a crash, took out a Bible, stripped naked began to pray.

According to witnesses, the cars collided head-on.

“He started screaming and out of nowhere he got naked and climbed on top of the car. He said ‘silence’, he began to read a Bible and he was like praying,” explained witnesses.

As shown in the images, the man climbed onto the roof of the car and was naked for several minutes, until he climbed back into his vehicle.

It is unknown if the man was under the influence of any substance.