QCOSTARICA – An out of control forest fire raging in the Parque Nacional Diriá (Diria National Forest) has devoured 1,500 hectares and has been raging for more than 15 days.

The forest, of mixed dry tropical and rainforest, is located near Santa Cruz and Nicoya in Guanacaste province.

Luis Diego Román, coordinator of the National Fire Management, Ministry of Environment and Energy (Programa Nacional de Manejo del Fuego, del Ministerio de Ambiente y Energía – Minae) explained that the problem is that working long hours in difficult areas and, when they finally manage to control the flames, a few minutes later – and especially at night – new outbreaks appear in another sector.

Although La Nacion reported the raging inferno controlled, a follow-up report by La Nacion quoting Román said “there is an issue of vandalism”.

This will have a strong impact on wildlife. Many animals will have to migrate and now it starts to rain, all the sediment of the burning is carried by rivers into water catchment tanks of many communities. That could have consequences, “said Román.

Román specualtes that the fires are presumed to be started by deer hunters. “However, so far it has not been possible to identify any of them,” say Román.

Costa Rica is at a disadvantage at this time of year, as the country is comes out of the drought of the dry season. In addition, the national park fire department (not part of the Bomberos de Costa Rica, the country’s fire department), has few experienced firefighters and lacks modern equipment, like planes that can deliver slurry to wildfires. 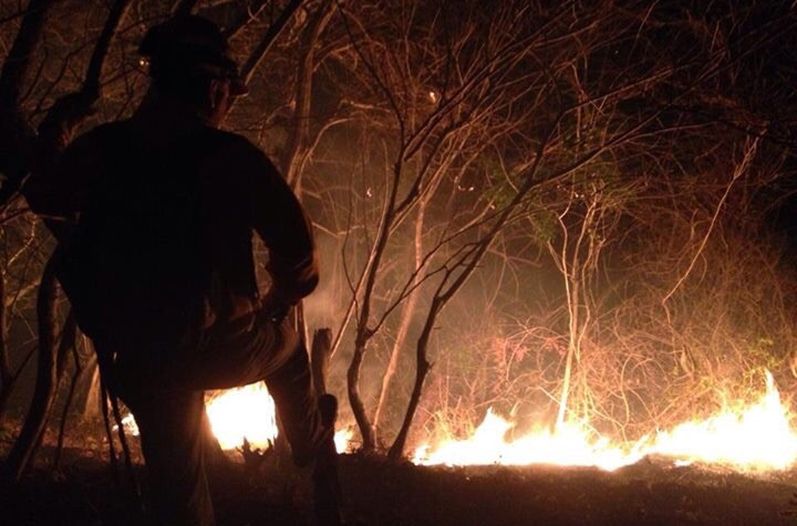 Alert.
According to the Minae, there have been (so far) 33 cases of wildfires in protected areas during the current fire season.

Although that figure is lower than in the previous year (when they were 40) the amount of vegetation consumed is much higher. While in 2014 there were 699 hectares destroyed, this year totaling more than 2,000 acres have burned.

Another concern of Minae is the dry season in the North Pacific could extend to June, one month past the typical May start of the rainy season.