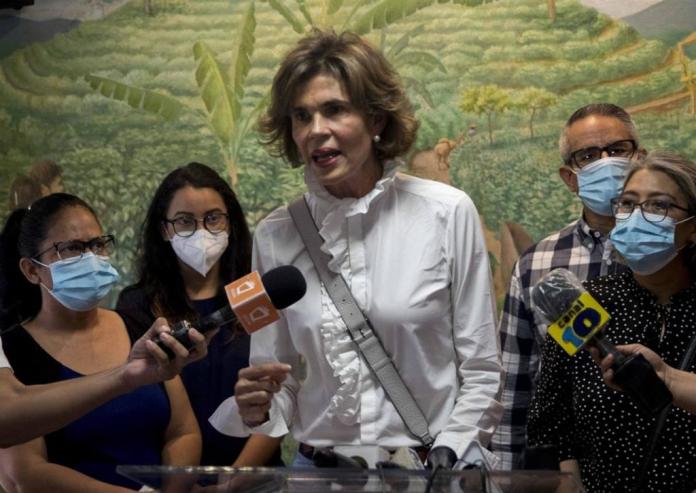 TODAY NICARAGUA (EFE) Oppositionist Cristiana Chamorro Barrios, who tried to challenge the president of Nicaragua, Daniel Ortega, in the controversial last elections, was found on Friday, March 11, guilty of the crimes of money laundering, goods and assets, improper appropriation and retention, abusive management and ideological falsehood.

Chamorro, a 68-year-old journalist by profession and who has been under house arrest since June 2, 2021, was found guilty by Judge Luden Martín Quiroz, of the ninth district criminal trial court in Managua, his defense informed the journalists, who rejected the ruling.

The Prosecutor’s Office requested 13 years in prison for Chamorro, who is the daughter of the murdered Nicaraguan hero Pedro Joaquín Chamorro Cardenal and former president Violeta Barrios de Chamorro (1990-1997).

Chamorro was the opposition figure most likely to win the presidential elections on November 7, in which Ortega was re-elected for his fifth term, fourth in a row and second along with his wife, Rosario Murillo, as vice president, with his main contenders in prison.

The trial of the opponent is part of a series of judicial proceedings against forty opposition leaders and critics of the Sandinista government, who were imprisoned prior to those elections and were accused mostly of ” treason against the country” or money laundering.

The Prosecutor’s Office accused Chamorro in her capacity as president of the NGO Fundación Violeta Barrios de Chamorro based on a complaint from the Ministry of the Interior.

According to the Government, this NGO, dedicated to the protection and promotion of freedom of the press and expression, “seriously breached its obligations before the Regulatory Entity, and from the analysis of the Financial Statements, period 2015-2019, clear indications of money laundering were obtained. of money”.

Along with the journalist, the general accountant and the financial administrator of the Foundation, Marcos Fletes and Walter Gómez, respectively, as well as Chamorro’s personal driver, Pedro Vásquez, were found guilty of crimes similar to those of Chamorro.

Also found guilty is Cristiana’s older brother, Pedro Joaquín Chamorro Barrios, 70 years old. Both are members of the Board of Directors of the Nicaraguan newspaper La Prensa, which on March 2 celebrated its 96th anniversary.

The Prosecutor’s Office requested 13 years in prison for Fletes and Gómez, and seven years for Vásquez and Pedro Joaquín.

The seven opponents to Ortega

Cristiana Chamorro is the seventh opponent who aspired to be a candidate for the presidency of Nicaragua in the last elections to be found guilty of money laundering or treason.

The other six are:

Ortega has branded the imprisoned and judged opponents as “traitors to the country,” “criminals,” and “sons of bitches of the Yankee imperialists.”

QCOSTARICA - What will happen to the expansion of...
Politics