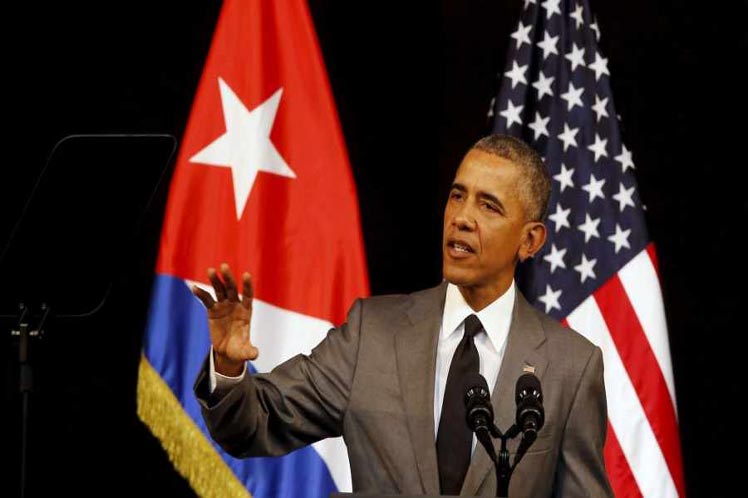 TODAY CUBA (Prensa Latina) The government of Cuba considers a positive step forward in improving relations with the United States an agreement announced Thursday by President Barack Obama, with only one week left in his mandate, to secure regular, safe and orderly migration between the two countries.

Obama’s declaration does away with the so-called ‘wet foot, dry foot’ policy that guaranteed any Cuban arriving in US territory, no matter how, to becoming a legal resident.

The executive order states that Cubans trying to get illegally into the U.S. and does not qualify for human aid will be subject to be returned according to the US laws.

By giving this step -the statement stresses- “We are treating Cuban immigrants in the same manner that We deal with immigrants from other countries.”

The document adds that the Cuban Government has agreed to accept the return of Cuban nationals (in U.S. soil) who has been ordered to return, just like it has accepted to receive immigrants intercepted at sea.

In a statement released Thursday night the Cuban Government highlights that this agreement also the parole admission program for Cuban health professionals that the United States applied in third nations to encourage them to illegally leave for the U.S.

The Cuban statement points out the agreement was reached after a year of negotiations based on mutual respect and the political will to strengthen bilateral relations and pave the ground for new understandings on diverse issues of common interest.

It should contribute – it adds – to normalizing migration relations which have been shadowed by aggressive policies of successive U.S. administrations that encouraged violence, irregular migration and human trafficking, causing the death of many innocent people.

The ‘wet foot, dry foot’ policy was until now an encouragement to irregular migration, immigrant trafficking and irregular entries to the United States from third countries.

By automatically receiving them, U.S. authorities were granting them a preferential and unique treatment no citizen from other countries get, therefore it was also an incitement to illegal exits.

TODAY NICARAGUA – In an unprecedented persecution, the Daniel Ortega regime detained four presidential candidates in one week, a move that is part of...
Quepos