TODAY CUBA NEWS (Prensa Latina) – Cuba celebrated Fidel Castro”s 88th birthday with a deep tribute to the historic leader of a Revolution, which fifty-five years after its triumph persists today for the peoples as a symbol of emancipation and social justice. Many activities allegorical to the date, such as concerts, photo and audiovisual exhibitions, dancing-music concerts, book launching, among other cultural events, were carried out throughout the island on occasion yesterday of the birthday of the great Caribbean statesman. 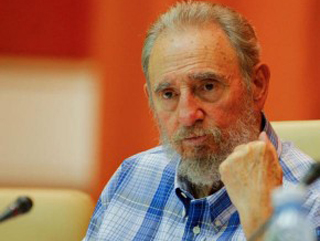 Among those initiatives were the launch of the book “El destino comun de Nuestra America” (The Common Destiny of Our America), a text about the Latin American integration dedicated to the Cuban leader, in recognition of his status as major figure in the region’s efforts for its unit.

Thousands of young people also joined, in tribute to Fidel Castro, the ranks of the Committees for the Defense of the Revolution, a grass-roots organization focused on mobilizing the entire people in tasks to defend the Cuban revolutionary process and the conquests of the socialism.

The wax museum in Bayamo, the only one of this kind in Cuba, also included in its collection a sculpture by the 1982 Nobel prizewinner in Literature, Gabriel Garcia Marquez, a personal friend of the Cuban leader.

The opening of several photo exhibitions, such as “Fidel, amor a la humanidad” (Fidel, Love to Humanity) in Sancti Spiritus, “Sembrador de virtudes” (Sower of virtues), in Havana, and the painting exhibit made by children and adolescents in Ciego de Avila to honor the revolutionary leader, were also stressed.

The photo exhibition “Fidel es Fidel” (Fidel is Fidel) by filmmaker Roberto Chile that was opened on August 12 with great number of people at the Jose Marti Memorial at this capital’s Revolution Square, was particularly highlighted.

Many of those initiatives were part of the context of the campaign “Si tengo un hermano” (If I have a brother), also dedicated to whom Fidel Castro defined as the best friend of Cuba, late Venezuelan and Bolivarian leader, Hugo Chavez.

Also included were the celebrations that throughout the world recalled Fidel Castro’s birthday and the multiple congratulations received from many parts of the planet by social, political, union organizations, figures and heads of State such as those of Venezuela, Nicaragua, and Bolivia.