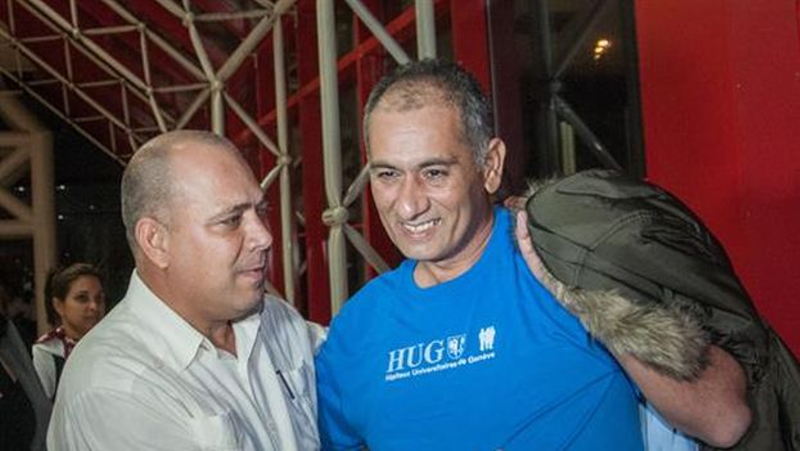 QCOSTARICA WORLD NEWS – The Cuban doctor Félix Báez Sarría who contracted Ebola when collaborating in Sierra Leone and treated at a hospital in Geneva, said he will return to the African country to complete its mission to combat the epidemic, reported the Cuban media Sunday.

“I will return to Sierra Leone; and I will finish what I started,” said Báez on his arrival in La Habana (Havana, Cuba) Saturday after overcoming the disease last month, according to the official Cuban newspaper, Juventud Rebelde.

The Cuban doctor said he was “very pleased and happy” to have returned to the island, during a reception, where his son Alejandro Delis and his wife Vania participated, along with the Cuban minister of Health, Roberto Morales and the deputy ministers of the sector,  José Ángel Portal and Marcia Cobas.

Báez also thanks “all” who were associated with his care and worried about his health. “I will recover completely,” he added.

On November 21, the Cuban doctor arrived in Switzerland for treatment. Wearing a protective suit, the 43 year old Báez  walked off the overnight transport in Geneva, and transported in a specially outfitted ambulance with a police escort to the Geneva University Hospital.

Báez, a member of the 165-person medical team Cuba sent to Sierra, caught the disease when he rushed to help a patient who was falling over. His treatment in Switzerland was organized through the WHO.

Ebola is spread through direct contact with the bodily fluids of sick patients – including blood, feces and urine. Health workers have been particularly vulnerable to contracting the virus.

Guinea, Liberia and Sierra Leone have been the hardest hit in the epidemic that has sickened more than 15,100 people since spring and caused more than 5,400 deaths, according to World Health Organization figures.