“Look at Cuba. What is happening on the island is very hard to handle.” (Twitter)

TODAY CUBA – The Cuban opposition group Ladies in White has spoken out again about increased repression against political dissidents on the island.

In Miami, Florida this week, the group spoke about the current political situation, which they claim is worsening.

“We ask the international community to tell the Castro regime to stop repression in Cuba,” the Lady in White member Maria Elena Alpízar said.

According to the organization, the issue has intensified following cooling relations with the United States in December 2014, and President Barack Obama’s approach to opening up the island.

“We gave a report (to the Organization of American States) with all the human rights violations that have been committed against us over the past 95 Sundays,” she said, claiming there has been some form of repression every weekend. 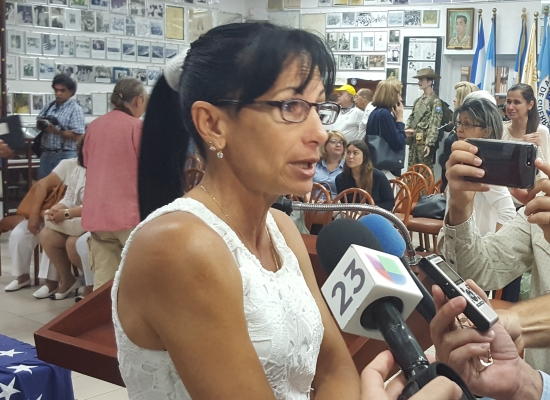 Leticia Ramos during a press conferrence in Miami (Foto: CubaNet)

Meanwhile, Leticia Ramos Herreria, another member of the group, asked that the international community step up its oversight of the island.

“Look at Cuba. What is happening on the island is hard to handle,” Ramos said. “We have Ladies in White in prison, transferred to prisons in other provinces, our children are being imprisoned to weaken the movement. Unfortunately, what is happening in Cuba, is very hard.”

The group believes the Cuban government is out to “destroy” the organization.

“By arresting Ladies in White, high ranking officials in the regime have let us know that we already cease to exist,” Ramos said, “that we can’t continue on Cuban streets, that we must come to an end.”

Despite repression by the Cuban regime, the group said it will continue to be active on the streets and not relinquich its demand for the freeing of political prisoners.

“Let it be very clear to the regime that we are willing to go to jail if necessary,” Ramos said, “because we are not going to give up our fight … We will continue, no matter what.”