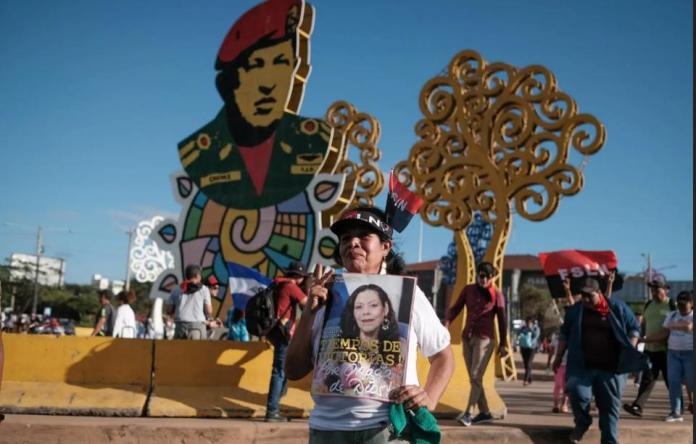 TODAY NICARAGUA – Calling people into the streets for a festive parade “Love in the Time of Covid-19” earned Daniel Ortega and his wife and vice president, Rosario Murillo, top honors in the Washington Post’s list of “Worst Leaders” during the pandemic.

Frida Ghitis, in her opinion piece titled: Which world leader has the worst pandemic record? highlights that “it is hard to top the response of Nicaragua’s near-eternal President Daniel Ortega and his wife (Rosario Murillo).

“They responded to news of a pandemic by calling people into the streets for a festive parade they called “Love in the Time of Covid-19. A perversely fitting allusion to the work of Gabriel García Márquez, whose novels seamlessly blend fact and hallucination.”

“Others arguably botched the crisis even worse than Trump did, and the list tells you a lot about the state of global governance,” wrote Frida Ghitis.

The others are former U.S. President Donald Trump, the president of Brazil, Jair Bolsonaro, Mexico’s President Andrés Manuel López Obrador, as well as the President of Belarus, Alexander Lukashenko, who recommended “vodka and saunas” to prevent coronavirus.

The article describes the response of the Trump Administration to the pandemic as “disastrous, a catastrophic pandemic and a calamitous presidency combined to give the United States the world’s worst pandemic death toll”.

However, it also acknowledges that the former US president may not have been the worst leader of the pandemic, “He has a lot of competition for the title of worst pandemic president. But he’s still a contender.”

“Bolsonaro has echoed Trump’s claims about hydroxychloroquine, squandering emergency pandemic funds on the useless treatment,” and firing health ministers for refusing to go along with his covid-19 denial and claimed that Brazilians might be immune to the “little flu” because they swim in sewage and nothing happens to them.

Bolsonaro, who himself became infected, called on Brazilians to protest antivirus measures and joined them in the streets. Few people wore masks, and he gleefully shook hands — sometimes after coughing into his own.

Today, Brazil ranks second only to the United States in the world for the most confirmed infections and deaths related to the coronavirus: 13,106,058 and 337,364, respectively.

Belarus’s Alexander Lukashenko, who faced months of mass protests after a disputed election last year, described the pandemic as nothing more than a “psychosis” and prescribed vodka and saunas to prevent it. “Lukashenko has blocked common-sense measures to slow down the virus at almost every turn,” says Ghitis.

Honorable mention goes to Mexico’s President Andrés Manuel López Obrador, who also caught the virus while playing it down early on, advised Mexicans to “live life as usual.” Even after he became infected, he rejected requests to wear a mask, saying he would wear one when corruption is eradicated in Mexico.

Back to Nicaragua, statistics from the Ministry of Health (MINSA) indicate that 179 people have died of Covid-19 in Nicaragua, while there have been 6,697 positive cases, in a population of 6.7 million people.

However, the independent Observatorio Cuidadano, a private group made of doctors and other medical professionals, puts the death toll at 3,014 deaths related to the pandemic and 13,312 suspected cases.

From the beginning, the Ortega-Murillo administration has never revealed figures on testing. Likewise, a study showed over 9,000 abnormal deaths, probably from Covid-19, were blamed on other causes.

“It is impossible to cover all the outrages by populist demagogues and assorted tyrants. (Apologies if I left out one you found particularly offensive.) Every world leader made mistakes, but there is something uniquely malignant about the manipulations and deceptions of the most outrageous players.

“Coincidence? Populism seems to be a comorbidity in a pandemic, raising its deadly toll,” writes Ghitis.

- Advertisement -
Paying the bills
Previous article“Nicaragua is not a Republic, it is a 16th century monarchy”
Next articleThe Best Mobile Solitaire Games Ranked in 2021

TODAY NICARAGUA – A large segment of the accusations filed against...
Read more