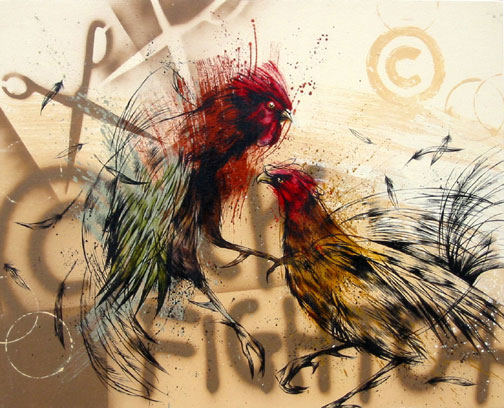 The metropolitan intervention unit of the National Animal Health Service (SENASA in Spanish) in Costa Rica recently confiscated 179 gamecocks used by a clandestine fighting ring in San Jeronimo of Moravia, in the northeastern outskirts of San Jose. This action was supported by members of Fuerza Publica, the national police force in Costa Rica.

Assorted cockfighting paraphernalia and other implements of this illegal activity were also seized at the scene; this included: Medications such as antibiotics and stimulants, and the sharp spurs -also known as gaffs- and blades that the roosters are fitted with so that they can engage in torturous and deadly fighting matches that often culminate in their violent demise.

An order to immediately demolish the fighting ring establishment was issued on the spot, and SENASA will bring charges against the humans responsible for this ghastly ring. The charges will result in sanctions issued by SENASA’s own sentencing tribunal.

A Rural Tradition Against the Law

Chapter IX of Costa Rica’s Public Law number 8495 sets forth the infractions and sanctions against those who do not procure animal welfare according to technical and ethical rules. This general law gives authority to SENASA to crack down on cockfighting rings, which are considered an illicit activity in Costa Rica that endangers animal welfare.

Although cockfights date back to Costa Rica’s Spanish colonial days, the fact is that the activity has been deemed illegal and prohibited for several years. It is considered an unlawful and intentional affront to harm animals that has little to do with heritage.

The reason cockfighting and raising gamecocks is often practiced in rural communities is tactical more than traditional. In rural and remote areas of Costa Rica, it is easier for cockfighting organizers to ply their wicked trade in concealment, stay one step ahead of the law. This is a lucrative clandestine activity that is based on gambling and has nothing to do with rural traditions.

SENASA and Fuerza Publica mostly depend on tips from the community and from confidential informants to identify new cockfighting rings and take them down.