Daughter of the Nicaragua Revolution – Archive, 1984 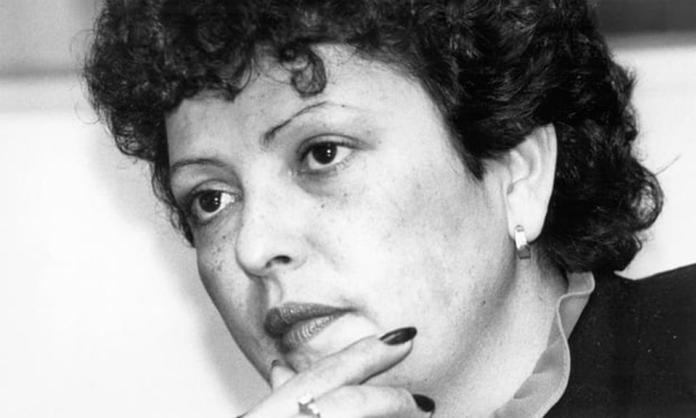 “Choose between me and the Revolution,” said Magda Enriquez’s husband when he discovered his wife had been working secretly for the Sandinistas in Somoza’s Nicaragua. “Of course, the choice had already been made,” says Magda Enriquez matter of factly.

Six years later she is a member of Nicaragua’s Council of State where she represents the Nicaraguan Women’s Association AMNLAE, is happily divorced, and deeply proud of the new life patterns evolving in the country and epitomized by her own six children.

At first glance Magda Enriquez might be mistaken for the typical product of the Latin American bourgeoisie sharpened by seven years at a conservative American university. With her purple fingernails, gold chains and dashing scarlet shirt she looks every inch the confident, successful executive. But in fact she is a trained soldier, peasant organiser, articulate exponent of the Sandinistas’s revolution and loving mother of her own five children, who has also swept up and adopted an extra child.

Magda Enriquez graduated from boarding school at 15, already determined “to break away from the role – to be a good woman equals be a good wife.” Her father was a successful businessman in an American Nicaraguan joint enterprise. He chose Philadelphia and a house full of relations as the framework to contain the clever daughter bent on university. Magda studied journalism and economics and married an American professor.

In 1970, back in Nicaragua with her husband and child, she founded the first school for mentally retarded children having done academic work on “education for children with special needs” in America. But discovering that most of the children she saw were mentally retarded “because of malnutrition” was a shock which plunged her into Managua’s slum areas. “I am a Roman Catholic, I believe in liberation theology. I literally could not face myself in the mirror every morning if I didn’t know that I was contributing to the fight against injustice.” (Liberation theory is the Christian teaching that the poor themselves can change their own social conditions. The name was coined in 1968 at a Latin American bishops’ conference at Medellin, Colombia.)

With the radical tradition growing among Latin American christians in the 1970s it was a short step for Magda Enriquez into joining the Sandinistas secretly in 1976. She became a founding member of the movement’s women’s association the following year.

But it was on May 15, 1978, that a dramatic break with the past became inevitable. “I will remember that day for ever. We were having a land sit-in with peasants and their families just occupying the fields to get the owner to come and talk. The police came, all the men were goaled and the owner sent tractors to run over the women or frighten them to run away… We made a human chain and the drivers could not bring themselves to advance. So the owner sent a plane to drop the poison which kills cottonbugs. We had 150 children in a state of collapse and we had to rush them to hospital. Rush, I should say was rather a relative word in the circumstances of having only two slow trucks.

“Then of course under the Somoza regime only people with money could be treated in hospital so we had to push and agitate before a doctor would see the children once we got there. Ten children died before they could be treated. That day I asked for military training. I saw then that a weapon can be the instrument of life, not of death. Though, as I had been very active in the peace movement in America in the 60s it was a big change, a hard decision.”

Magda Enriquez does not give the impression of wasting much time sentimentalising hard decisions. Her oldest child, a 14-year-old boy, has joined the militia two years under age. “Of course I don’t like him carrying a gun – as a small child he was never even allowed a toy weapon on principle – but, in our situation, of course I am very proud of him.”

“A lot of children lie about their age to get into the militia. Before the revolution many children were active in the resistance to Somoza. They feel very strongly that the Revolution belongs to them and they are determined no one will take it away from them. Six months ago we had a twelve-year-old decorated with a gold medal after he had operated a machine gun after his father was killed by the American-supported contras attacking their village. Another 12-year-old is a national hero with the first children’s park in Managua named after him.

Magda’s work for the Sandinista Government and for the women’s organisation means long weeks away from her children. “But I have no anguish when I am away like now for two months because there is so much solidarity between us all that I know others are taking them to a movie or a circus on the weekends. The girls in my office coached one of my boys through his last maths exams because I was away on a delegation.

“My children know they come first with me and any meeting can be cancelled or postponed if they have real need for me. Otherwise they know any work for the Revolution is for them too. They are quite secure. And they have an additional security because ever since I went underground in 1978 the party assigned another woman, an old woman, to be with them and she still is. I have a great sense of security myself from the knowledge of the neighbourhood and party responsibility for all our children.”

But Magda has no illusions that the Revolution has changed people’s minds “from one day to the next.” Women’s problems have not disappeared overnight. “We, the women’s organisation, exist because of the problems, but the Revolution has given us the opportunity to solve them.”

She has been a member of several delegations which have laid the groundwork for the election procedures later this year by visiting the US, Canada and Western Europe. “Democracy is a completely new experience for Nicaraguans. I’ve never voted. We had only one electoral law – written in 1912 by an American marine.” The elections, like the last four years of long ideological debates within the Council of State, are also “the opportunities the Revolution has given us” for Magda Enriquez.

As the spokesperson for hundreds of thousands of Nicaraguan women she is a walking challenge to the American Government myths about her country which have persuaded President Reagan to try and crush the Sandinistas. And her robust example of successful liberation is an excellent rebuttal of those westerners who like to believe that women are inevitably trapped between irreconcilable demands of public and private spheres of life.