The deadline of  is today (Friday) is nearly here for more than half a million corporations in the country to pay their “corporations tax’. 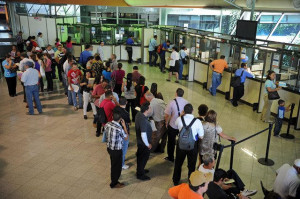 This is the third year of the tax, and the government isn’t joking — those who have missed three annual payments stand in danger of being shut down by the Ministry of Finance.

Of the some 545,000 corporations inscribed with the National Registry, some 273,000 (mostly shell companies) are in dire peril of being dissolved. From the day in April of 2012 when the law went into effect, the Ministry has been country the consecutive periods of nonpayment.

After Saturday, Feb. 1, the Registry will be unable, by law, to continue the name of laggard corporations on their lists. (And the payment is closed on Saturday.)

The new tax is responsible for bringing in ¢60 billion colones during the 2012-13 period. The law earmarks 95% of that money to finance the police.