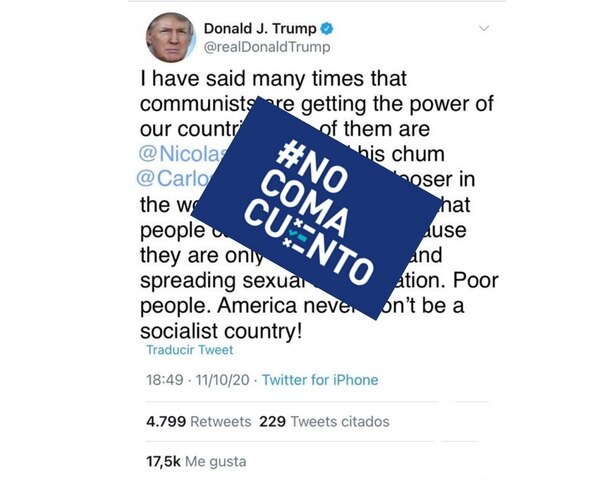 #DEBUNKED: NOT TRUE that the president of the United States, Donald Trump, published a message on Twitter in which he relates the president of Costa Rica, Carlos Alvarado, to Venezuelan president Nicolás Maduro.

The false publication, in which the president of the United States, supposedly, assures that Alvarado and Maduro are friends and accuses them of spreading “sexual degeneration”, circulates in Costa Rica via WhatsApp groups.

In the supposed message, Trump refers to President Alvarado as “the biggest loser in the world” and assures that the United States “will never be a socialist country”, as he suggests that Costa Rica and Venezuela are.

“I have said many times that the communists are getting power in our countries: two of them are Nicolás Maduro and his friend Carlos Alvarado, the world’s biggest loser. It is totally incredible that people can believe in them because they are only busy stealing and spreading sexual degeneration. Poor people. America will never be a socialist country,” the alleged message reads.

The tweet that Trump published at the date and time of the false message was an electoral post directed to California.

Turn California around. No more shutdowns, rolling blackouts, forest fires (management), or water rationing (because millions of gallons are stupidly routed out into the Pacific Ocean). VOTE TRUMP! https://t.co/KSAgyPPmGc

“Turn around California. No more shutdowns, continuous blackouts, wildfires (management), or water rationing (because millions of gallons are stupidly shipped to the Pacific Ocean). VOTE TRUMP!” Published the president.