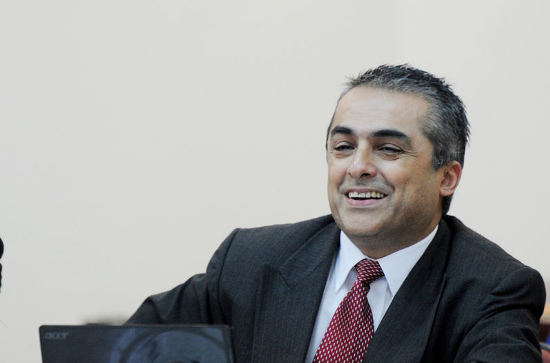 QCOSTARICA – Labor Vice Minister Alfredo Hasbum is being investigated by an Ethics Court for allegedly having engineered an illegal settlement of a debt his former employer, the Teacher’s Pension Board (Jupema), found it had with the universal health care system for unpaid employer contributions.

His troubles started when the Board found itself in debt to the Social Security Administration for 238 million colones for unpaid contributions for the period 2003-10.

Under Hasbum’s administration 25 person were contracted for professional services. But Jupema never made the contribution.

The current administration of the Board admits that they failed to pay workers quotas to Social Security, plus paid vacations, Christmas bonuses and other standard fees. Although he was director from 2000 to 2010 Hasbum says he knows nothing of the oversight and stoutly maintains his innocence.

He says the professionals were contracted for temporary three month periods. The figure of 238 million is Jupema’s estimate but Social Security has yet to present its bill. In fact, Jupema has filed an appeal for the health care and pension agency to recalculate the figure.

Current board chairman Roger Porras calculates that the real figure is lower, something more like 160 million colones. The Social Security Administration original report only covers 2008-10. But Hasbum’s troubles are not over, no matter what figure is set.

But for the Citizen Action Party (PAC) that has always prided itself on squeaky clean politics, the situation is uncomfortable, following the electronic press gag bill and alleged offers of ambassadorial posts. Labor Minister Victor Morales appeared especially disquieted when interviewed by La Nacion.

Morales told the paper that “we don’t want a single doubt” left by the Procuraduria of Ethics, a government law firm investigating ethical issues. “The Procuraduria has the legal competence to investigate and to determine in an objective manner if there is a conflict of interest,” the Labor Minister told the paper.

But there is always suspicion of a whitewash when the government investigates itself, specially since Hasbum is accused of trying to get the debt to Social Security pardoned of a court-ordered payment. For this move itself, the pension board has spent an estimated 3.3 million colones in legal fees and is still not off the hook.

It is obvious that Labor Minister Morales is trying to play it straight, backed by the President. It is, after all, one of Morales’s own staff under the magnifying glass. It was Morales who brought the matter to the Ethics prosecutor.

It is not unusual for private firms to be brought to court for nonpayment of entitlements but this is a royal snarl, especially since the accused is a high Labor Ministry official. Neither Hasbum or Morales is a happy camper this week.

QCOSTARICA - Costa Rica received this Sunday morning, June 6, the second direct shipment from AstraZeneca of vaccines against covid-19. The flight landed at 11:05...
Coronavirus

QCOSTARICA - Vaccination centers against covid-19 were transformed this Saturday to be able to vaccinate more people. Universities, civic centers, parking lots and even...
Disasters