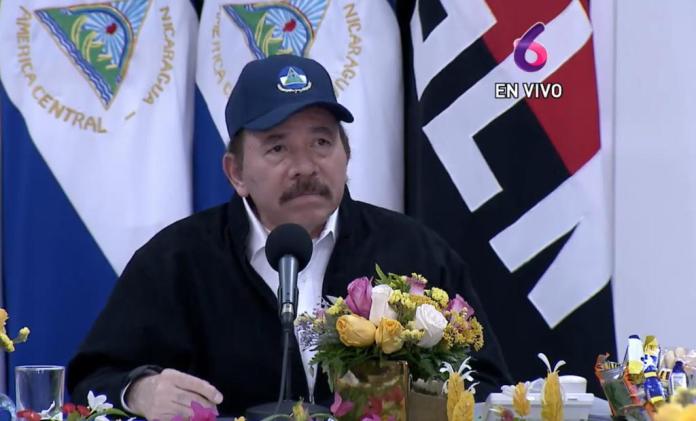 After 34 days of being absent from public and sparking speculation about his health, even rumors of his death, and his administration’s handling of the new coronavirus, Nicaraguan President Daniel Ortega reappeared on Wednesday in public and assured that the country is fighting “patiently” against Covid-19.

In the appearance on national radio and television networks, Ortega did not announce any measure to prevent the massive spread of the new coronavirus which makes critics think that he only gave the face to give a proof of life and encourage his militancy.

He was also not interested in giving a personal example, because before sitting down to give his talk, he greeted all the officials present with a handshake, and were all seated at the usual distance. At the end, Ortega and Murillo went around the table and greeted everyone in typical proximity, including hugs and kisses.

Ortega and his administration has been strongly criticized by regional health authorities for refusing to take restrictive measures to deal with the pandemic.

Dressed in his typical black jacket over a white shirt and a blue cap with the shield of Nicaragua, the 74-year-old former guerrilla appeared on national television with his wife and vice president, Rosario Murillo, and surrounded by the officials of his cabinet, from his home and government office.

Only he spoke during the special broadcast, announced earlier in the day, all television and radio stations to broadcast unedited and without commentary.

Without referring to his absence, Ortega acknowledged that in that period that he was absent, that from March 11, when the first case of coronavirus was detected in Nicaragua, to April 15, 1,237 people have died in the country, but only one by coronavirus.

The president, who has resisted decreeing quarantine and closing Nicaragua’s borders, while promoting marches, massive festivals, and trips to the beach, said that the pandemic has had “slow progress” in the country and that the three positive cases to date “are imported”.

After Ortega’s oration and leaving the room, Murillo spoke to the state cameras and confirmed that there are nine confirmed cases of the covid-19 in the country.

Ortega, who spoke for 25 minutes uninterrupted and without a script, looked relaxed and rested. None of the officials – nor did Ortega or Murillo – wear masks.

The dictator stated that the country will face the pandemic “with limited resources”, “with great patience and discipline”, “with self-denial of health workers”, “with citizen participation”, “with much discipline”, but without concrete measures.

Ortega assured that the country has “the capacities to care for the population,” speaking of the health system. He took advantage of the issue of the pandemic, to demand changes around the world, specifically mentioning that the United Nations organization has to “change, it has to be re-founded.”

Although Telcor announced that the appearance would be at 2:00 pm, the dictator appeared more than three hours later, following his customary delays in public events.

For the last month, Ortega has been the only president absent in the face of the pandemic, while the rest of the leaders of America and the world have been at the forefront of the health crisis, adopting preventive measures suggested by the WHO, as well as economic plans to help financially to the population that has lost their jobs, informal workers and others more vulnerable, as well as companies.

During his absence, there were strong rumors about his state of health, including those who spoke that he was dead. In this Wednesday’s broadcast, many viewers were struck by the tone of the skin of his hands, which looked pale and his face apparently made-up, with a uniform base around the contour of the face.

Ortega did not detail how many coronavirus tests have been carried out so far in the country. In fact, he gave few details on the pandemic in the country and his administration’s actions and results, to the contrary he spoke on the need to keep the religious faith, that what the world needs more of is medicines and doctors and less armament.

“Are they going to end the virus with atomic weapons? With the rockets that are being developed now in these arms races to conquer space and turn space into a war field to kill, for death. What are those weapons for? Those weapons are not for life, they are not for health, they are not for the food of millions of human beings who perish year after year from hunger, these weapons are for killing and thousands of dollars are invested. billions and those who invest billions of billions know perfectly well that these weapons cannot be used because the day they are used the entire population of the planet disappears, they know perfectly well, so why this madness of investing billions, billions of billions in armament ”, he pointed out.

“Okay, an army to protect the sovereignty of the country and the territorial and security of the country. The police are fine, it’s fine. But now those transnational forces that are just looking for the dominance of the entire planet, that is a sin,” he said.

“God is telling us, He is sending us this sign. And that is the opportunity to make a change towards peace, ” he stressed.

Nicaragua “has the fewest number of cases in the Central American region because we have built many hospitals and we have trained medical personnel,” he pointed out.

The director of the Pan American Health Organization (PAHO), Carissa Etienne, said a few days ago that she was concerned that Nicaragua had refused to act to control the spread, which increased the risk of a pandemic.

Epidemiological experts affirm that in Nicaragua there is “underreporting” because the health authorities are not conducting enough tests to detect the presence of the virus.

- Advertisement -
Paying the bills
Previous articleCoronavirus in Costa Rica: What is herd immunity and why is it said that we will all be exposed to covid-19?
Next articleAll commercial leases are exempt from VAT for April, May and June