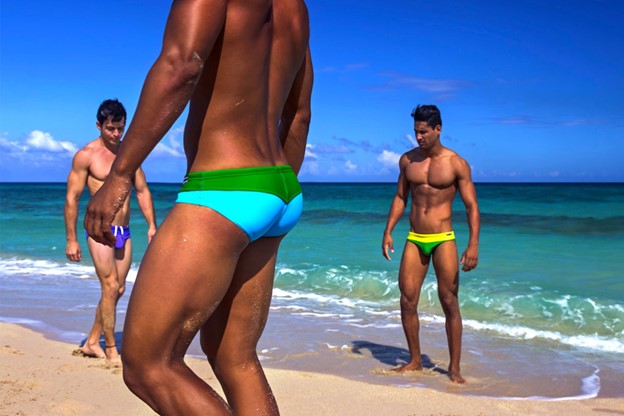 TRENDS – Latin America is a tropical hotspot for not only the most beautiful beaches, but also some of the boldest swimwear for men. Just ask any native Brazilian man where to buy men’s swimsuits, and he’ll probably steer you towards a beachwear shop full of sungas (or more popularly known as speedos for men).

Already teeming with boxy swim trunks on Google’s shopping platform, the U.S. male swimwear market is saturated with knee-length board shorts that rarely venture outside of the 7- to 8-inch inseam.

So, where exactly can a guy in rural New York shop for sexy mens swimwear styles without ordering internationally? After comparing today’s top trendy menswear stores, Differio is one of the few USA-based online men’s fashion shops offering the most unique, designer swimwear for men, diversifying fit, color, and design.

But, are men in the U.S. ready for sexy mens swimwear styles despite cultural differences? You might be surprised by Differio’s recent poll findings.

After surveying men online, the results revealed that 49% of their trendy male demographic actually preferred mens swim briefs over mens swim shorts. There’s a gross assumption that the majority of North American men won’t be interested in men’s skimpy swimwear styles because of the prevailing stigma around speedos – which can’t be said for every individual.

You can’t help but think of Costa Rica’s carnival atmosphere when you’re browsing their new arrivals. Harnessing Latin America’s brazen beach spirit, some of their most coveted styles of men’s designer swimwear are crafted in neon shades, body-hugging fits, and tropical prints.

More importantly, Central and South America continue to be the birthplace for so many established and emerging swimwear designers; a culturally rich region where vibrant hues thrive and the male form is celebrated.

The global swimwear market is still expected to surpass $29.1 billion by 2025, despite the pandemic’s economic disruption, according to a report by Grand View Research. Even pool sales have surged astronomically last summer, causing a shortage in pool supplies and equipment. More than ever, people are gravitating towards stylish swimwear as a form of sartorial escapism due to pandemic-related travel restrictions.

Fashion can provide comfort (literally and figuratively), especially during times of unrest, with the ability to mentally transport you to your own paradise by simply wearing a bathing suit covered in palm trees. Besides, what better place to test out mens bikini swimwear than wearing it in the privacy of your own backyard?

If you’re curious to know more about today’s sexy mens swimwear styles, scroll down to check out this summer’s hottest trends to watch.

From mens bikini swimwear to swim shorts, today’s colorblock trend is as vibrant as the Costa Rican coastline. With a nod to the 80s and 90s, you can expect to find mens designer swimwear with chunky, asymmetrical blocks in bright neon hues. Not only a trendy detail, colorblocked patterns also break up mens swimsuits visually, which can highlight or hide certain areas of the body to your advantage.

Metallic shades deliver next-level shine that look simply stunning on the beach. From swim briefs to square trunks, you can score ultra-shiny mens designer swimwear with that chromatic sheen, like silver, gold, and bronze. If you want to go more muted, try going for sexy mens swimwear with a patterned overlay of metallic foil, such as gold camo or shiny florals.

Want sexy swimwear for men with that extra edge? Laser cutouts add allure to even the most basic mens swim trunks. Referred to as “laser” cutouts due to the design process, mens bathing suits with cutouts completely expose the skin with holes, unlike mesh swimwear that only reveals sheerness through the fabric. Whether you’re wearing men’s swim briefs or body-fit trunks, you can easily draw attention to certain areas of the body with cutouts along the waist or thighs.

QCOSTARICA -The contagion rate of covid-19 in Costa Rica,...
National