Doctors, Nursers, Teachers and Other Public Sector Workers Took To The Streets 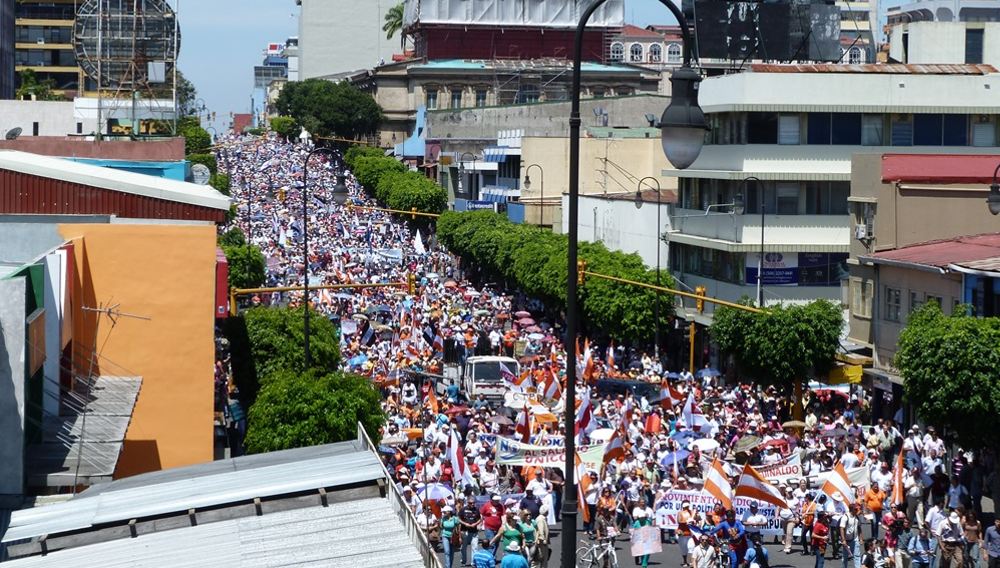 As announced several weeks back, public sector workers – workers at state hospital and clinics, public school teachers and professors and dock workers at the Port of Limón- took to the streets today.

Major routes across the country were blocked, including the autopistas Bernardo Soto and General Cañas, creating major traffic congestion around the international airport. The General Cañas was completely closed off in front fo the Hospital México. Another group choked off all access at the Juan Pablo II rotonda, then moved along the autopista towards La Sabana.

In downtown San José, a major protest action took place in front of the San Juan de Dios hospital. In Zapote, in front of Casa Presidencial, protestors closed off all access, and several got into a confrontation with police, demanding their right to protest on public streets and access to Presidenta Laura Chinchilla.

Doctors, nurses, teachers and other public sector employees came together in every corner of the country in protest of what they call “neoliberal” policies of the government.

The Minister of Labour, Olman Segura, called on union leaders to resume dialogue. “We have been more than clear in the sense that the negotiations table is open, that the government is open to discuss a possible new formula for calculating wage increases for the public sector, in addition to bringing order to the pay system that allows odious gaps in wages in this sector”, wrote Seguro of Facebook.

The minister of government communications, Carlos Roverssi, was not as eloquent, taking a hard line attitude on live radio – ADN 90.7FM  – calling the protestors “filibusters”.

“The filibustersa are all the governors headed by Presidenta Chinchilla, who have looted the country with their corruption like the Trocha (border road)”, said Luis Chavarria, head of the Unión de Empleados de la Caja (UNDECA), in response to the Roverssi comment.

While the majority of the protest action is taking place in San José, the areas of Turrialba, Siquirres, San Ramón, San Carlos, Cuidad Neily, Cuidad Quesada, Puntarenas, and Buenos Aires were all affected by hundreds of protestors.

In Limón and Moín, the docks were paralyzed, when more than 500 dock workers decided to join the protest action.

Allan Hidalgo, president of the Junta de Administración Portuaria y de Desarrollo Económico (JAPDEVA), said the protest is costing US$1.000 per hour for each ship that is not loaded/unloaded.

At 9am there were five ships (four in Moín and one in Limón), including two loaded with gasoline and chemicals, waiting out the protest.

- Advertisement -
Paying the bills
Previous articleUPDATED: Farm Labourer Sentenced to 120 Years Prison For Raping His 9 Year Old Daughter And Making Her His Life Partner
Next article[BLOG] Motorcyclists – The Scourge of Costa Rican Roads