Does the United States want to take over Venezuela? 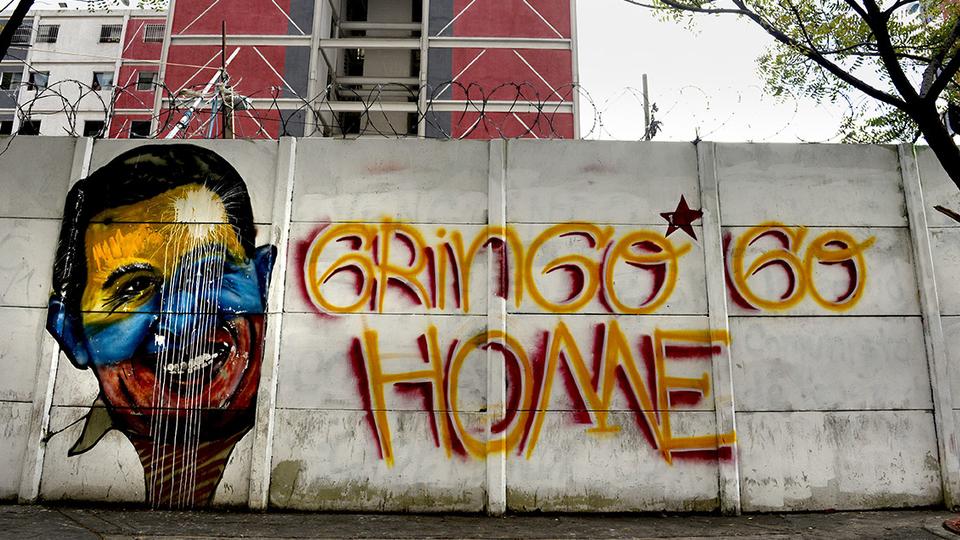 OPINION by David Chávez Salazar – I am apprehensive about the attitude of prominent libertarian figures toward the Venezuelan crisis. Like the chavista leaders, they insist that the United States is behind the chaos in Venezuela, and President Trump can’t wait to send marines to Caracas.

I wonder at what moment these libertarians decided to turn their backs on the Venezuelan people to position themselves, at least in the realm of discourse, on the side of their aggressors. I invite you to understand some of their arguments.

Ron Paul declares that so far the most considerable aggression that the United States has committed against Venezuela was on 11th April 2002, when the CIA conspired with Venezuelan opposition groups to orchestrate a coup d ‘état against Hugo Chávez. After the failure of this operation (since the deposed president returned to power three days later), Washington has been in charge for all these years of manipulating the electoral processes in Venezuela and canceling the results when they do not suit its interests.

Paul is undoubtedly a brilliant thinker, and many libertarians consider him an excellent leader. However, this time, the disciple must disagree with the master. Firstly, on 11th April 2002, there was no coup d ‘état in Venezuela. What happened was that Chavez violently repressed some demonstrations, leaving dozens dead. Faced with this situation. The Military High Command demanded his resignation, which Chavez accepted. Later, in the act of solidarity with his leader, the then vice-president refused to assume the presidency, which generated a void.

The vice-president’s decision created a climate of uncertainty. Pedro Carmona, head of Fedecámaras (the organization that brings together Venezuela’s industrial associations), assumed the presidency and remained in office for only two days. What happened next was implausible: Chávez regretted his resignation and regained power illegally.

Nor is it true that the US government spent millions of dollars to manipulate Venezuelan elections or to nullify their results. In 20 years of chavismo, there have been a similar number of elections, 21 to be exact, of which the opposition has won only two. On the other hand, the White House recognized the results of all the presidential elections that Chávez won (1998, 2000, 2006 and 2012) and the first one that Maduro won (2013), despite the apparent fraud.

A strange event occurred in 2006. That year, Chávez easily won the elections after eliminating all securities to his opponents and taking over the entity that organizes the polls (the National Electoral Council). During the campaign, he insulted and threatened then-US President George W. Bush. Despite Chavez’ threats, the United States recognized Chávez’s fraudulent victory and promised the beginning of a “positive and constructive relationship with the democratic government of Venezuela.”

According to the Ron Paul Institute, the most recent American interference in Venezuela was the “coup d ‘état” against Maduro in early 2019 that resulted in Juan Guaidó’s self-proclamation as president of Venezuela. The institute is misinterpreting the events of January. There was no coup d ‘état on that occasion either. In 2018, Maduro called for presidential elections, which he won through the most blatant electoral fraud in Venezuela’s history. So much so that for the first time, the government of the USA did not recognize this presidential election.

Maduro assumed the presidency without legitimacy. In the absence of a legitimate president, the constitution provides that the head of the legislative branch (in this case, Juan Guaidó) assumes the presidency till new elections are conducted. The USA was a mere spectator through this process.

Those who are worried about American aggression in Venezuela are unaware that it is already an occupied country. The governments of Cuba, China, Russia, Syria have interfered continuously in Venezuelan politics, and Turkey has recently joined the list.

Cuba’s interference has been the most aggressive of all. Since 1999, Venezuela has practically functioned as a Cuban colony. Chavez and Castro signed “cooperation pacts” that have obligated Venezuela to send thousands of barrels of petroleum to Cuba daily. It is estimated that by 2020, Venezuela will have sent eight billion dollars of crude oil to Venezuela.

Additionally, Venezuela also grants expensive credits to the Castro regime, among other concessions. Currently, a quarter of Cuba’s economy depends on the “aid” provided by Chavismo.

Venezuela is not only an economic colony but also a political one. Havana has sent military agents to the South American country to directly administer the structures of power: intelligence services, armed forces, economic planning, health system, and distribution of social aid. Cuban intelligence controls all these sectors. For example, Cuban officers hold higher positions than Venezuelan ones in the armed forces.

Relations with the Middle East are even murkier. In 2014, the Center for a Free Secure Society revealed that the Chavista regime had issued at least 173 passports to jihadists seeking to enter North America. Chávez signed several agreements with Hezbollah for money laundering activities, arms trafficking, and the deployment of terrorist cells in Venezuelan territory. Tareck El Aissami, of Syrian-Lebanese origin and one of the most powerful men in chavismo, has personally issued these passports and other diplomatic documents to both Hezbollah members and Iranian spies.

Due to these alliances with global terrorism, Venezuela has become a destabilizing factor in the American continent. A terrorist could catch a plane in Caracas and arrive in Miami in just three hours. Despite the threat that it poses to its national security, the US government has chosen not to intervene.

Maduro and his allies assert that the reason the US wants to destabilize Venezuela is that Chavismo has refused to serve the interests of big US companies. According to Daniel McAdams of the Ron Paul Institute, the United States cares not about the Venezuelan people, but its oil. Once the obstacle represented by chavismo is eliminated, the transnationals will be able to enter Venezuela to take advantage of its crude oil reserves, which are the largest in the world.

The institute’s statements demonstrate their ignorance of Venezuelan reality. You may be surprised to learn that Chavismo has granted concessions to large US corporations in the oil, gas, and mining sectors. Chevron, Repsol, Shell, and BP America are companies who have benefitted the most through a crony capitalist relationship with the regime.

In 2010, Chavez granted a 40-year deal to Chevron to exploit the precious Orinoco Oil Belt and others to use essential gas fields and develop fracking projects. In 2016, Maduro authorized American transnational companies to exploit deposits of bauxite, coltan, diamonds, gold, iron, copper, and other minerals in the Orinoco Mining Arc.

On the other hand, despite the anti-American rhetoric of Chavismo, the United States has until today been the leading destination of Venezuela’s oil exports, constituting 41% of total shipments of petroleum products abroad. Moreover, the regime influences the national oil production of the United States in crucial ways. The Venezuelan government owns Citgo Petroleum, a Houston-based company that supplies to 29 states. Until 2019, the United States recognized Maduro’s authority over the company.

Paul Craig Roberts, a conservative analyst widely cited in some libertarian circles, adds that Washington has stolen $21 billion from Venezuela in sanctions, in an effort to delegitimize the Maduro government and blame Venezuelan socialism (which, for Roberts, consists only of the nationalization of oil) for “bringing hunger to the people.”

Three types of sanctions are imposed on Venezuela: revocation of visas to some officials of the regime, freezing of their assets in US territory, and the prohibition of US cities and companies from trading with those sanctioned. Surprisingly, the White House has not imposed any sanctions on Maduro. In other words, the “terrible” sanctions, that Paul and Roberts mention, have affected only certain officials of the regime and not the Venezuelan people as a whole. We have never seen nor will we ever see real sanctions like embargoes, boycotts of Venezuelan products, or prohibiting ordinary Venezuelan citizens from entering US territory.

It is not the sanctions that have made the lives of Venezuelans miserable, nor any imaginary aggression from the North. Maduro is lying about it and some libertarians who, hopefully in good faith, have decided to think like him. Although Mr. Roberts trivializes it, socialism is responsible for the chaos in Venezuela, and only a just war against socialism will restore hope to the brave people of Venezuela.

David Chavez Salazar is an economist. He is currently the editor in chief of the magazine “Estudios Libertarios” and has a venture in the 3D printing sector. Opinion article first appeared at Panampost.com. Read the original.