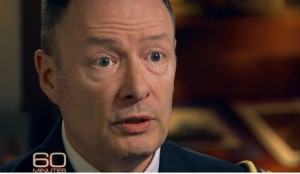 Sunday night’s episode of 60 Minutes featured what CBS promised was an unusual inside look at the secretive National Security Agency (NSA), but instead offered a routine look at the agency’s propaganda with no critical voices. Opening with the disclosure that CBS correspondent John Miller formerly worked in the office of the director of National Intelligence, the program prompted NSA director Keith Alexander and other agents to reiterate the agency’s usual talking points about bulk surveillance.

The interview also featured an extensive attempt by NSA agents to discredit former contractor Edward Snowden. Snowden, who leaked documents this year which revealed the extent of the telephone records program and other efforts like PRISM, was described by CBS’ John Miller as a “20-something-year old high school dropout contractor.”

Discussing the NSA’s visit to Snowden’s former Hawaii home, Rick Ledgett, the agency’s head of an Edward Snowden task force, said he “couldn’t bring himself” to sit in Snowden’s chair. “He would work on the computer with a hood that covered the computer screen and covered his head and shoulders, so that he could work and his girlfriend couldn’t see what he was doing.” “That’s pretty strange,” Miller said.

The NSA and White House have worked in recent months to repair the US intelligence community’s image, opting to make selective disclosures about the secret orders and legal interpretations that have allowed the government to conduct bulk surveillance on American citizens. Meanwhile, journalists in possession of documents leaked by Snowden continue to release reports about the NSA’s unprecedented surveillance programs. While Snowden was reported to have left the stolen files behind before seeking asylum in Russia, the NSA says that he may still have up to 1.7 million documents.

Earlier this year, we learned that Costa Rica was named among the countries spied on by the NSA. In July, the Brazilian newspaper O Globo reported that the NSA has been spying on the Central American country’s Internet and telephone communications as part of the controversial Prism surveillance program.

The report claimed that the NSA has been spying on several Latin American countries between 2008 and the first third of 2013, based on documents obtained from the surveillance agency.

In June of this year, Snowden told the British newspaper The Guardian that the NSA has been collecting massive amounts of information about Internet and telephone communications as part of a program codenamed “Prism.” Prism supposedly allowed the NSA access to emails, telephone calls, and online conversations via Facebook, Google and Microsoft, among others.

The O Globo article noted that another program known as “Boundless Informant” was also used to collect metadata in Latin America. 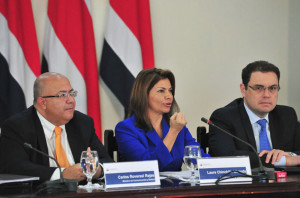 Costa Rica’s Presidenta Laura Chinchilla disturbed by the news of the US spying on Costa Rica. In July the Presidenta was fuming, saying publicly “no me gusta” (I don’t like it) following reports by the Brazilian newspaper that Costa Rica was under constant surveillance by the Americans. (Click here for our report).

But the focus on actively listening to phone calls is a red herring; the NSA has not been accused of doing that. The agency instead collects metadata from every phone call placed within the United States — something the government argues is harmless and exempt from constitutional protections. That argument is highly controversial with privacy advocates since the bulk collection of metadata can reveal much more about a person than even the contents of some communications.

Among his slippery answers, Alexander denied a damning Washington Post report from October which claimed the NSA was secretly tapping into the internal traffic of Google and Yahoo without permission, in order to access data before it became encrypted. “We are outraged at the lengths to which the government seems to have gone to intercept data from our private fiber networks, and it underscores the need for urgent reform,” Google’s chief legal officer David Drummond told The Verge. Tonight, Alexander appears to have deflected those claims, telling CBS that “we’re not going into a facility or targeting Google as an entity or Yahoo as an entity.”

With files from TheVerge.com

QCOSTARICA - A Costa Rican tried to enter the country through the Juan Santamaría International - San Jose Airport - with US$153,244 (the equivalent...
Expat Focus