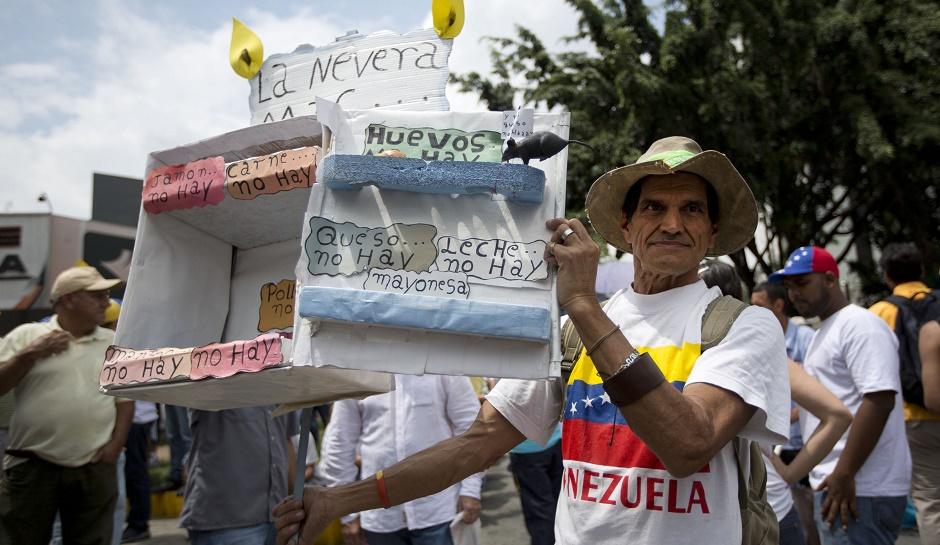 A man shows a cardboard box crafted to depict an empty refrigerator to indicate the shortage of products, during an opposition march in Caracas, Venezuela, Saturday, May 14, 2016. The protesters are demanding that electoral officials accelerate the certification of the petition signatures that would kick off a recall of President Nicolas Maduro. (AP Photo/Ariana Cubillos)

From Inquisitr.com – Recent reports of the chaos erupting in Caracas and across Venezuela have led many Americans to blame socialism for the current state of affairs in the South American country.

While Venezuela’s president, Nicolás Maduro, is a member of the United Socialist Party of Venezuela. South American-style socialism cannot be compared to Bernie Sanders’ more Nordic-based democratic socialism, nor can the current situation in Venezuela be viewed as an example of things to come for the United States should Sanders win the presidential election.

Maduro’s party is the political result of the Bolivarian Revolution in Venezuela, led by Hugo Chavez. Throughout his career, Chavez made no secret of the fact that his style of socialism aligned with that of Fidel Castro and those who inspired him, such as Karl Marx and Vladimir Lenin. 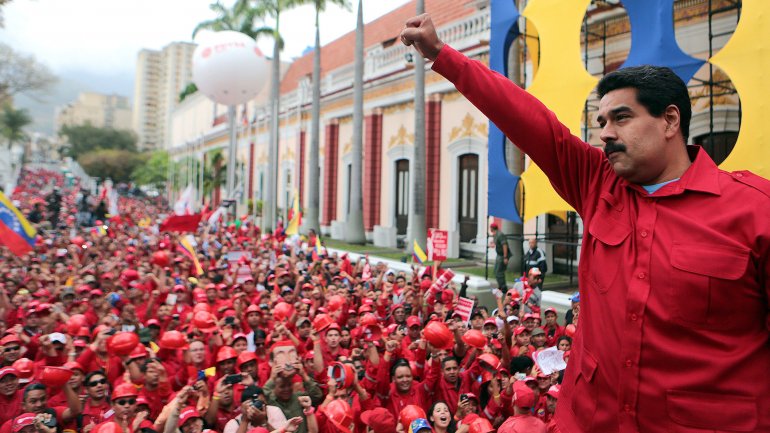 Today, Chavez and Maduro’s socialism, appropriately labeled “Chavism” in Venezuela and “21st century socialism” in other parts of Central and South America, is viewed by much of the world as an extreme version of socialism that has proved itself not only ineffective, but also restrictive. In other words, it is a form of socialism of which Lenin could be proud — it’s authoritarianism.

As an example of the power held by Venezuela’s president under Chavez-style socialism, since Maduro’s presidency began in 2013 as a result of Chavez’s death, he has ruled by decree multiple times. In Venezuela, Maduro’s rule by decree has allowed him to govern for extended periods of time without the need for legislative approval.

This type of rule is one often used by dictators and other authoritarian-style governments — which is not socialism. Furthermore, rule by decree is impossible in the United States. For an example of this impossibility, all one must do is look at Congress’ current refusal to even consider Merrick Garland’s Supreme Court nomination.

Speaking of the Supreme Court, following the elections held in Venezuela in December 2015, 13 new justices were appointed to the country’s 15-man court; all 13 are Maduro supporters. At this very moment, Nicolás Maduro is ruling by decree in a country where he has no concerns about any laws he makes being struck down as unconstitutional. Thanks to the three branches of the federal government, this issue is yet another that Americans do not have to fear.

During the early years of Maduro’s presidency, protests became increasingly common in Venezuela. These protests were the result of inflation, high crime rates and the shortage of goods. Today, the protests in Venezuela have continued because the government has done nothing to help the situation in the country; instead, the situation has only worsened. The actions Venezuela’s government has taken have not been targeted at fixing the problems; Venezuela’s government simply wants to stop the protests.

To make an already bad situation worse, recent reports, such as a May 20 report published by CNN Money, indicate that the country is running out of basic goods, including food and medicine. Just as the political parties in the United States blame each other for the country’s problems, Maduro is pointing fingers at the opposition, which is Venezuela’s Democratic Action party. However, unlike what generally happens in U.S. politics, Maduro is also blaming foreign powers, including the United States, for the country’s current situation.

As much as U.S. politicians like to point fingers, it is rare that even the most contentious among them blame turmoil within U.S. borders on foreign influence, with the obvious exception of terrorist attacks. As he cannot blame terrorists for the current state of the union, Maduro is looking for anywhere to place the blame for Venezuela’s problems — as long as the finger points away from him.

In Venezuela, a portion of the population sees Maduro’s foreign finger-pointing as ridiculous. However, as pointed out in a Forbes article on the situation in Venezuela, the people in the country who are “economically illiterate” are buying what Maduro is selling. If an American president tried to blame North Korea, for example, for a shortage of anything in the United States, the American public would see that as ridiculous.

The point is that the United States is not Venezuela, Bernie Sanders is not Nicolás Maduro and democratic socialism is not Chavism. Simply because Venezuela’s government labels itself “socialist” does not mean that the government actually follows the true principles of socialism. Does calling an elephant a giraffe turn the elephant into a giraffe? Of course it doesn’t, and simply calling a dictator a socialist does not a socialist make.

- Advertisement -
Paying the bills
Previous articleIn Venezuela Flour, Pasta and Milk Can Cost A Month’s Pay
Next articleEarl Upgraded To Hurricane As It Nears Belize