Drinking and driving continues to be a problem in Costa Rica 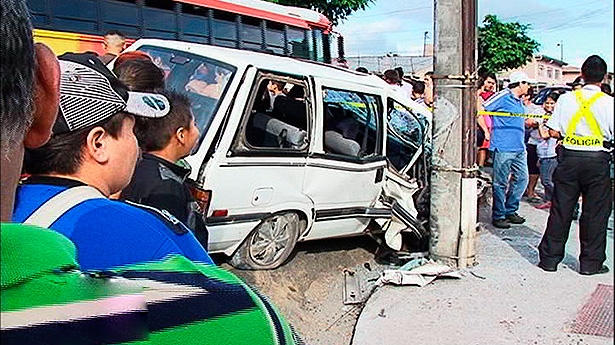 QCostarica doesn’t normally report on traffic accidents, even when drunk drivers are involved, for there are just too many and is a daily occurrence. But, this story deserves a mention.

Despite the tough new traffic laws and the threat of going to jail, in addition to losing the drivers license, many still get behind the wheel after throwing back a few. Or many.

And many with their loved ones in the vehicle, like the case of a drunk driver accident over the weekend in Sagrada Familia (San José).

The driver of the small van, which witnesses say and confirmed by the Policia de Tránsito (traffic police) was drunk behind the wheel, crashed into a light post.

In the van were five people – all related  – including a young girl who, to top it all off, was sitting in the front seat on the lap of a woman believed to be her mother.

The Cruz Roja say they had to attend to 10 people: five in the van, five others outside the van.

And for the froth on the brew, the traffic police had to fight off some of the area residents confronting the officials in their act to take the drunk driver to jail.

QCOSTARICA - Restricted borders, increased immigration patrols, limitations in transportation and movement and the pandemic has not deterred Nicaraguan migrants from arriving in Costa...
Trends

The blackjack game is associated with excitement and joy. The players experience great enthusiasm while playing the game because of its great rewards for...
HQ

QCOSTARICA - Almost a million people aged 58 and over, throughout the country, are targeted by the Caja's health centers to be vaccinated against...
National

QCOSTARICA - The disappearance of the taximeters (popularly known as "marías") will not be immediate despite the new mobile application that will manage services...
National

QCOSTARICA - The nighttime vehicle restrictions starting on March 1 will be from 11:00 pm and not 10:00 pm as this month, and on...
Pura Vida

QCOSTARICA - Dona Rosa lost everything in her life and surrendered her will to the hands of others. Luck changed one day when she...
Health

QCOSTARICA - A cold push is expected to grip all of Costa Rica this weekend, with wind gusts of up 100 km/h and cooler...