Don’t take the title of this article too seriously but there is some truth to it.

According to Article 104 of Costa Rica’s traffic laws, it is perfectly legal to run a red light between 10 pm and 5 am. But you cannot speed through an intersection when the light is red without slowing down. A driver first must stop and make sure other vehicles that have a green light and right of way are not coming. Pedestrians also continue to have the right of way when the light is red. So you need to look out for them, too. 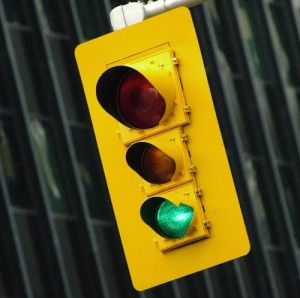 Furthermore, if you come to an intersection with a sign that says, “No right turns on a red light” (prohibido virar a la derecha en rojo) and you turn to the right, you will not only get a ticket but a US$380 dollar fine and lose four points from your license.

Costa Rica is not the only country that allows drivers to go through intersections with red lights at night. Mexico has a similar law but for a different reason. Crime is so high in the Federal District  (DF) that it is dangerous to stop too long at a red light for fear that you will get robbed or have your car hijacked. Perú, Paraguay, Nicaragua and some parts of the U.S. have similar laws.

In Costa Rica speed bumps are called reductores de velocidad (speed reducers), policías durmientes (sleeping policemen) and muertos (dead men). So, it is indeed possible to run over a dead man here with out killing anyone. Seriously speaking these devices are very effective because if you drive over one at even a moderate speed, both you and your car will receive a jolt you will never forget. Your car’s tires or suspension may also get damaged as a result.

People used to hold drag races on the street in front of where I live in Heredia. The municipality installed a couple of speed bumps and the problem was solved immediately . Recently some neighbors in Guayabo de Mora took it upon themselves to install speed bumps because the municipality was dragging its feet. Well the plan backfired when it was discovered that they made the speed bumps three times higher than legally permitted ( 5 centimeters is the legal height and the ones built in Guayaba de Mora are 15 centimeters high). Now drivers who pass by there are going at a snail’s pace for fear of damaging their vehicles. The result is a huge traffic jam during rush hour.