The weekend trip that Presidenta Laura Chinchilla to Peru on a private jet has generated many quests that have no clear answers. 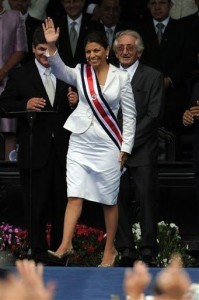 What is questionable here is not that the Presidenta travel to a private activity, but how the information of the trip was handled.

The Spanish slang meaning of “Torta”: Commit a Screw Up. There are many other meaning, but we try to keep it clean.

For one, the public was notified of the presidenta’s departure from Costa Rica after the plane had left the ground.

Two, the country’s president is obligated, by protocol if not by law, to notify the Legislature whenever it is not in the country. Clearly this was not the case this weekend, no such notification was given, this confirmed by legislators of the opposition.

Three, why deny that the cost of the use of the plane was funded by a foreign oil company? Then announce that the presidenta will pay for it our her own pocket. And then, “there is no conflict of interest here” when confirmed that the foreign company is footing the bill for what I like to call “Air Chorizo One“.

Four, in her May 1 address to the nation, Presidenta Laura Chinchilla herself promised “greater transparency”. However, this case is a perfect example of the Presidenta not listening to her very own words.

Five, up to now, the only words are from her Communications Minister, Francisco Chacon, who by the way was, with his wife, the minister of Foreign Trade, Anabel Gonzalez, on the plane with the president.

In summary, these are my thoughts. The Presidenta knows she this is her last year of reign and since re-election is not in play, thefore no matter what she does or doesn’t do the people have already had enough of her, so what the ….?

I think we can see more of these kinds of blatant disregard for public opinion and disrespect for the people.

Down to to only 10 beds for ‘very critical’ covid patients

QCOLOMBIA – Thousands of Colombians across the country took to the streets on Saturday for May 1 – May Day –  marches and protests...
National

QCOSTARICA - A PhysEd teacher managed to get the Judiciary to agree to pay him just over ¢1.2 million colones (US$2,000) for taking him...
World

These are the business closings and the vehicle restriction for May

QCOSTARICA - What are the new measures that apply next week and the rest of the month, to reduce the exponential growth in the...
Health

QCOSTARICA - After three days of nothing, not a word from the Ministry of Health, on the current covid-19 situation, Monday afternoon numbers were...
Health

QCOSTARICA - After breaking all records last week, the number of new daily cases of Covid-19 in Costa Rica continues on the decline, according...
Photos of Costa Rica

Some landscapes seem too beautiful to be true ... But they are! The Arenal volcano is seen from Tliarán. Joaquin Murillo: "I took the photo yesterday...
El Salvador

Q24N - The president of El Salvador, Nayib Bukele, announced on Monday the possibility of continuing with the removal of officials, two days after...
Economy

Bars and restaurants in San José will be closed next week

QCOSTARICA - Among the closures - lockdowns - starting Monday, May 3 and continuing to Sunday, May 9, in the Greater Metropolitan Area of...