Stop Being A “Nini”? 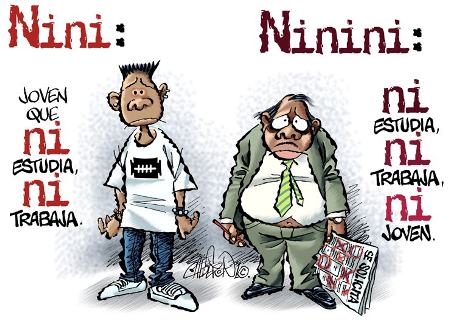 “Nini” is Spanish word to describe a young person that ‘ni estudia, ni trabaja’ … in other words, someone that doesn’t study, and doesn’t work. Just sorta bums around all day, and lives off their parents’ money.

In Costa Rica it is estimated that 12% of those between 15 and 24 years of age are ninis.

A program called “Empléate” aims, with greater involvement of the private business sector, to ensure the young to receive scholarships and integrate them into the labour market.

The initiative, launched in late 2011 by the Ministry of Labour, supports young people between 17 and 24 who neither study nor work, a group of “ninis” that nearly reaches 200.000 people in the country.

Costa Rica’s State of the Region in Sustainable Human Development Program, in coordination with El Salvador’s Studies for the Application of Law Foundation (FESPAD), found that ninis between the ages of 15 and 25, can be either gender, with 40% being female and 60% being male.

Ninis are often perceived as being lazy and ambitionless, but according to the International Labor Organization (ILO) many have tried and failed to find employment or have left poor working conditions.

In its Global Employment Trends for Youth 2012 report, the ILO warned that the use of temporary contracts for young workers has nearly doubled since 2008 – this means that more young men and women are being used in positions which may last only months and then they spend the rest of the year unemployed.

Connecting education to market needs through partners who are committed to making hiring program participants, is the formula for this project. High rates of unemployment among the young population created the need for the initiative.

Creating solutions for this group rests with the Ministry of Labour, which can foster job creation, but it is the companies that hold recruitment opportunities, says Olman Segura, the minister of Labour.

- Advertisement -
Paying the bills
Previous articleEDITORIAL: The Presidenta’s “Torta”
Next articleBacteria In At Least 8 Patients Has San Juan de Dios Hospital on Alert