Electoral Supreme Tribunal Calls to Vote with Dignity for Honduras 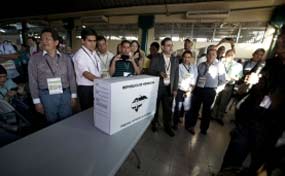 President of the Supreme Electoral Tribunal (TSE) of Honduras, David Matamoros, today called for a vote with dignity and public-spiritedness for the future of this Central American nation. Eight political forces compete for the presidential chair Porfirio Lobo will leave vacant on January 27, 2014, and whose successor should be known officially tomorrow.

So far, according to recent surveys published a month ago, Xiomara Castro, from the Freedom and Refounding Party, and Juan Orlando Hernandez, from the National Party, bear the greatest chances of victory in an election difficult to predict.

The Hondurans also vote for three presidential appointees (vice presidents), 298 mayors, 128 deputies in Congress and 20 of the Central American Parliament, the last two with their respective substitutes.