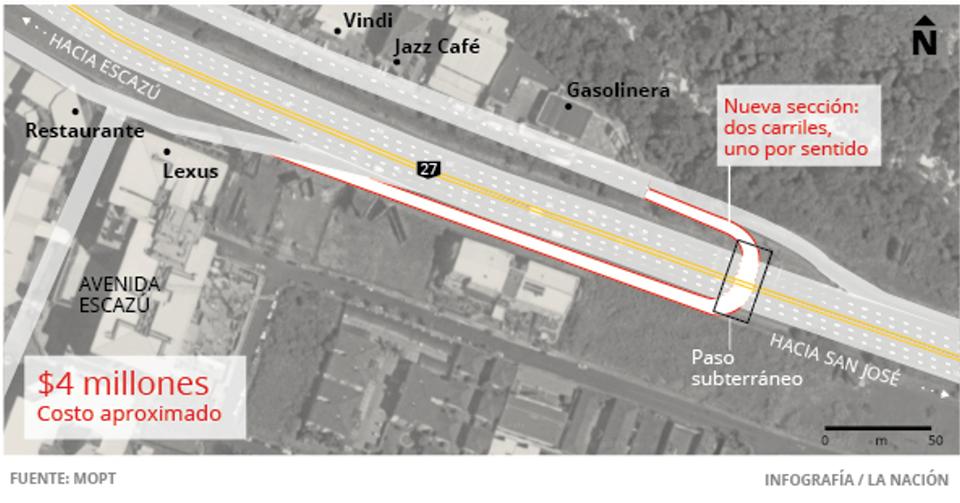 A group of businessmen have offered the Ministry of Public Works and Transport (MOPT) to pay for the construction of an underpass near Hospital Cima, in Escazú.

The work, estimated at US$4 million, would allow flow of access through an underpass at the east end of the north and south commerical strips, similar to the underpass on the west end.

The east end underpass would also allow timely access by emergency vehicles to the CIMA hospital.

Asdrubal López, an engineer from Traesa S.A., the contractor hired to take charge of the project, said they already have ready plans and construction permits are in the process of approval. The approval process also includes that of Globalvia, the concessionaire of the Ruta 27.

Guiselle Alfaro, Deputy Minister of Infrastructure, said that the Government agrees with the work and said the designs have already been reviewed by the National Council of Roads (Conavi).

The official added that they are in talks with Globalvia for approval and for start of the work.

“The coordination with the Ministry has been made through Traesa, two weeks ago we met the group of entrepreneurs who want to donate the work … The proposal is an underground passage that will alleviate and distribute the vehicle flows,” commented Alfaro.

There is still no date for the start of the work,  the proponents must submit a guarantee of completion of the work, so that the project is not abandoned before its completion.

“We are in the final coordination with the concessionaire because we have to ensure that route 27 is not affected during the construction process,” concluded the deputy minister.

“The idea is to start the work as soon as all of the permits are obtained. All execution of the work will be carried out in coordination with the concessionaire of Route 27,” López said.

Lopez gave no details on the investors who will pay for the intersection.

QCOSTARICA - How much does it cost to avoid a trial...
Read more

QCOSTARICA - The fraction of the Partido Acción Ciudadana...
National