Epsy Campbell alleges “racist” and “machismo” campaign against her

Under fire for her controversial appointments in her post at the Foreign Ministry, Vice-president Epsy Campbell alleges she is being subjected to “the cruelest and dimensionless racist and machismo.’ violence that has been unleashed on a person who assumes a position of power! I am a woman and I am Afro-descendant.”

Campbell made the assertions, describing a wave of offensive publications against her on the social networks, after alleged improprieties in appointing her goddaughter (ahijada in Spanish), Catherine Rivera McKinley, as an adviser to the Chancellor.

On social networks, Campbell is accused of:

According to a report by La Nacion, Campbell only spread the message among her acquaintances, confirmed by the press office of the Foreign Ministry. The VP did not issue any public statement or press release, nor posted her comments on social networks.

The racist and sexist insults denounced by Campbell were published by citizens on social networks such as Twitter and Facebook. Most of these directly allude to the color of her skin. 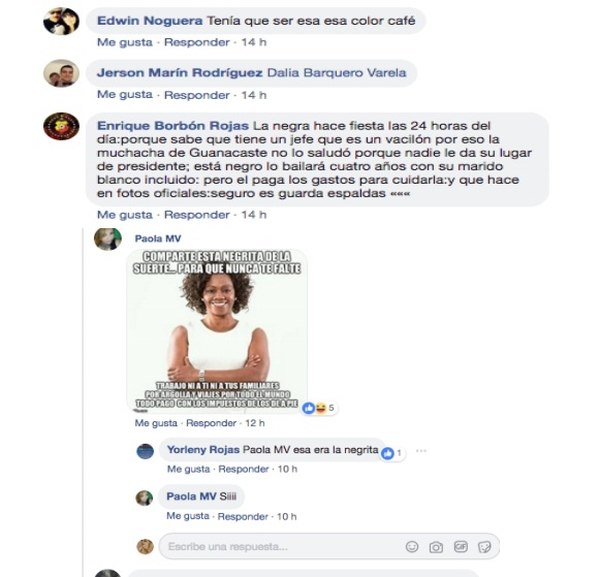 This Tuesday afternoon, at a press conference at Casa Presidencial after the cabinet meeting, the ministers and leaders of state institutions said that they supported the Chancellor and that they criticized the offensive demonstrations against her.

Since July, the Public Ministry (Public Prosecutor’s Office) is investigating several appointments in the Foreign Ministry, which were not specified.

In addition, in the case of McKinley in particular, the Office of the Public Ethics Office recently opened an ex-officio investigation.

Additionally, they sent the legal and technical notes that were used to make each of the appointments, “with the aim of demonstrating the suitability of the people who hold these positions and compliance with all legal requirements.”

Although Campbell recognized the ex-adviser as her goddaughter under oath in Congress, Rivera denied it in her resignation letter on Monday. In that letter, released on Monday by the Foreign Ministry’s communication office, McKinley also argued racist and sexist reasons for her departure, after a “smear campaign against Campbell.”

- Advertisement -
Paying the bills
Previous articleExchange rate pressures would hide end of the year seasonality when the dollar tends to fall
Next articleHello, Devaluation! Central Bank ‘Got Tired’ Of Spending Reserves To Curb Rise In The Dollar

Whether you're celebrating a birthday, anniversary, or just getting...
Travel