Throughout the year, the dollar exchange market experiences seasonal effects as a result of the demand or supply of the foreign currency.

One of those moments would be between November and the beginning of the Christmas season in December. In that period, it is usual that the dollar exchange rate adjusts downside.

This has been the trend of the market, at this time of each year, if one takes as reference the period from which the Central Bank abandoned the exchange rate band in January 2015, for a managed float. 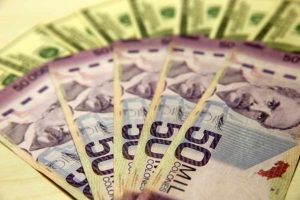 What happens in the second half of November of each year is that the supply of dollars increases, because the economic agents sell foreign currency to meet the payment of the Aguinaldo (year-end or Christmas) bonus and taxes, and that causes a reduction in the price of the dollar.

Inclusive, this has become a time in which it is recommended to buy dollars, to take advantage of its decline.

After reaching its highest point in November, the exchange rate begins a downward trend until the beginning of December.

However, recent events and the Central Government’s need for resources to meet its obligations prevent this from happening this year.

Seasonality will always exist, so it will be present this year, but could be attenuated or reaffirmed according to market behavior, explained Luis Diego Herrera, an economic analyst at Acobo, speaking to El Financierio, Costa Rica’s financial newspaper.

Just by looking at the behavior that the price of the dollar has shown throughout the year, it is possible to think that there will be surprises in the last two months.

In addition, recent upward pressure on the exchange rate gives rise to the assessment that seasonality would no longer show such a clear downward trend, as in previous years, but would be hidden by other pressures.

First of all, this year the season will take place under very different conditions. There is greater fiscal pressure and for the moment, Bill 20,580 – tax reform or plan fiscal –  is fighting a battle in Congress in search of more votes in favor.

The bill was approved on October 6 in first debate, but it has yet to pass the tests and return to the Legislature for second reading and final vote.

The maturity profile of the debt, at the end of September, shows that the Treasury must pay payments for a total of US$1.928 billion dollars between November and December. The figure includes instruments in colones.

“In this year, there are relevant elements that do not allow for a clear reading in the short term, however, it is expected that the trend will be devaluation by the end of the year,” Silvia Jiménez, manager of Inversiones de Mercado de Valores (Securities Market Investments) told EF.

Another factor to consider is the new administration of the Banco Central de Costa Rica (BCCR) – Central Bank of Costa Rica.

Since assuming the presidential chair, Rodrigo Cubero was clear and concise in indicating that he would bet for a greater flexibility of the exchange rate so that eventually there is an indicator that fluctuates more.

The appetite of the non-financial public sector could generate pressure on the behavior of the dollar price. It is possible to think that savers will prefer to save dollars, and thus will demand more foreign currency. They would do so as a measure of protection because it is a strong currency.

In addition, “globally, there is a tendency to weaken other currencies against the US dollar, partly due to the rise in US interest rates,” explained Freddy Quesada, manager of INS Valores.

This trend has also been presented in Costa Rica, although with a greater influence of the pressures exerted by the fiscal deficit and the lack of liquidity by the Government to pay its obligations.