Epsy Campbell Rolls Out Her Campaign 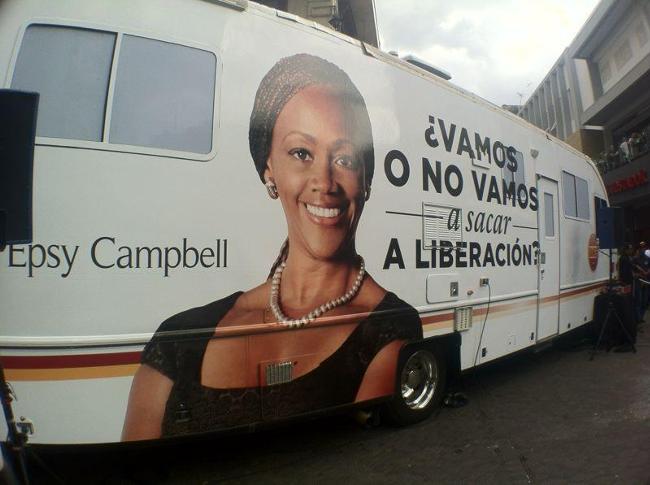 Rolling in on an RV in the middle of the Avenida in downtown San José, Epsy Campbell launched her campaign for the leadership nomination of the Partido Accion Cuidadana (PAC).

The former legislator’s campaign slogan is “Vamos o no a sacar a Liberación?” (Are you we going to push out the Liberationists?).

Epsy fielded questions from the press in front of her RV in the Monday afternoon campaign launch. Her campaign manager had said over the weekend there would be no stage or bandstand, that Epsy would be among the people.

The young contender for the presidential chair in 2014 said she would not spend more than ¢15 million colones on the party leadership campaign.

The Partido Acción Ciudadana (PAC) is a is a left-leaning political party whose platform is based on encouraging citizen participation and involvement in politics.

The party was founded by Ottón Solís in December 2000 and it was Solís who ran and lost the first three presidential elections for the party. On February 8, 2010 – the day after the election – Solis announced that he was abandoning politics for good, expressing his desire to create spaces for a new emerging leaders.

At the end of the press conference, Epsy was put on the mat by a young man from Limón. Watch the video.

QCOSTARICA -  How has Costa Rica done during its first year in the fight against covid-19? If you ask the demographer Luis Rosero Bixby,...
National

QCOSTARICA - For their preparedness to face tsunamis, the communities of Tamarindo and Sámara were recognized by the Junta Nacional Tsunami Ready de Costa...
Costarica History

QCOSTARICA - This year Costa Rica celebrates 200 years of independent life. And the road to commemorate the 200th has begun with the launch...
Guatemala

Q24N - Guatemala on Tuesday received 200,000 doses of the vaccine against covid-19 donated by India, which it will use to complete the immunization...
Redaqted

Q TRAVEL - Located in the extreme north of the Pacific coast, in front of the Santa Rosa National Park, in the sector of...
Fuel Prices

QCOSTARICA - At 12:01 am this Wednesday, fuels will be more expensive, as the third price hike of the year takes effect. The increase in...
World

Q REPORTS - The former leader of the Soviet Union and 1990 Nobel Peace Prize winner, Mikhail Gorbachev, who has been self-isolating to protect...
The Americas

Q REPORTS - U.S. President Joe Biden is expected to outline his vision of Washington's Latin America policy at the next Summit of the...
Infrastructure