It’s almost four years since the Ruta 27 (San José – Caldera) was opened and today is still “not completed”, missing are the final expropriation of six lots, according to the Consejo Nacional de Concesiones (CNC) – National Concessions Council. 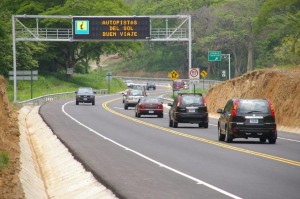 The CNC head,  Edwin Rodríguez, explained that the expropriation of the lots is in the courts because the owners are no accepting the appraisal value of the properties.

Four of the properties are at the ramps of La Rica, one in Santa Anaa and the other in Atenas.

Rodríguez said that once a judge gives the order for possession or rules for a higher value, the concessionaire, Autopistas del Sol, can complete the remaining work on the highway.

The appraised value of the each of the six lots is around ¢70 million colones (US$140.000 dollars), according to data from the CNC.

QCOSTARICA - The contagion rate of covid-19 once again...
Lighter Side