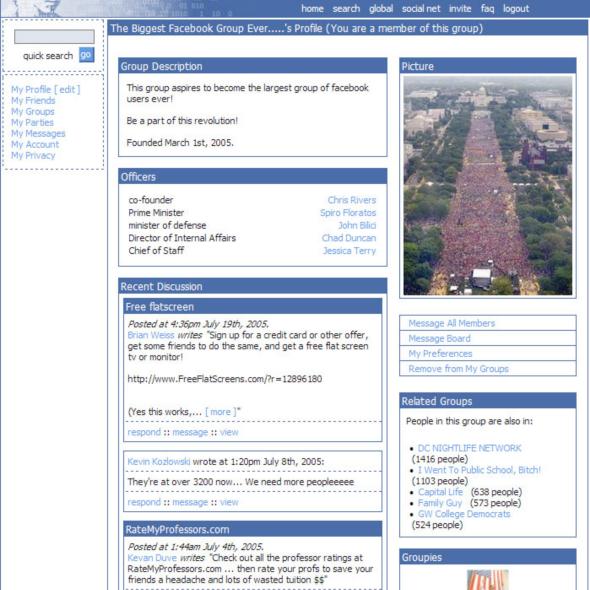 On Feb. 4, 2004, in his Harvard dorm room, Mark Zuckerberg launched thefacebook.com, a website where college students could post information about themselves, trade messages, and become virtual “friends” with one another.

It was entering an already-crowded field of social networks.

Friendster was the world’s most popular at the time, but it was about to be overtaken by a one-year-old upstart called MySpace. Google had launched Orkut just weeks earlier.

Facebook was different because it was only for college students, featured a clean layout devoid of spam, and had no immediate plans to make money. It was an instant hit. “I assume I’ll eventually make something profitable,” Zuckerberg shrugged in a June 2004 interview with the Harvard student newspaper. (It took him a while, but Facebook turned its first profit in 2009, and last year it reported a profit of some US$1.5 billion on nearly US$8 billion in revenues.)

By December the site had 1 million users, and it hadn’t even added its photo-upload feature yet.  Here’s what thefacebook.com looked like in 2005, a year after it launched:

Over the years it piled on the features. Some, like News Feed and the like button, changed the Internet forever. Others, like Facebook Gifts, not so much. For its 10th birthday, Facebook has put together a timeline of significant events in its own history. It reflects a bit of a selective memory—you won’t find Gifts, Beacon, or the site’s short-lived experiment with majority rule on this timeline. But then, that’s part of what made Facebook so appealing in the first place: the ability to edit your own image to your liking.

he timeline is one of several features that Facebook released Monday night, on the eve of its anniversary. On Tuedsay it will unveil a product called “A Look Back” that lets users make a personal movie or slideshow of their favorite moments in their lives since they joined Facebook. The company also launched a slick new iPhone app, Paper, in the App Store on Monday.

Here’s Zuckerberg’s statement on the eve of his brainchild’s 10th birthday:

It’s been an incredible journey so far, and I’m so grateful to be a part of it. It’s been amazing to see how people have used Facebook to build a real community and help each other in so many ways. In the next decade, we have the opportunity and responsibility to connect everyone and to keep serving the community as best we can.

- Advertisement -
Paying the bills
Previous articleHerradura Sunset
Next articleOP-ED: And Here We Go One More Time!

QCOSTARICA - Six out of ten people in Costa...
News