The development of Costa Rica’s nature protection, its demographics, and reasons for high social well-being. Costa Rica is as a model for sustainable development, highlighting its successes in family planning efforts.

By Patrícia Dérer – Costa Rica is a country of exceptionally rich and well-protected biodiversity. It is a solid democracy where people live long, relatively healthy and happy lives while leaving a small ecological footprint.

Together with its good and improving environmental performance and overall well-being, the country is characterized by a below replacement fertility level, the lowest in Central America, and by decreasing population growth.

This makes Costa Rica a perfect country for the TOP (The Overpopulation Project), success story series.

In the next episode of our success story series, after Indonesia, Iran and South Korea, we turn to Central America and examine Costa Rica.

This is a small country (51,100 km) with a population of 4.9 million. Today, Costa Rica’s nature enjoys an exceptionally good protection status as 27.6% of the country is under protection. This helps to preserve its biodiversity harboring 5% of all the species on the planet. Half of the country is covered by tropical forest, which shows an expanding trend.

However, Costa Rica’s nature has not always been in such great shape as today. By the 1980s, rampant logging had decreased the original 75% forest cover to only 17%, eliminating 50,000 hectares of forest per year at the peak. The unchecked deforestation, creating mostly pastures for cattle farming, was driven by a series of complex factors including population growth, international market economics, and settlement encouragement through government incentives.

High birth rate coincided with the accelerated deforestation that peaked between the 1950s and 1970s, but the causes of the deforestation were complex and were not necessarily been caused primarily by the local growth and expansion of the population.

Nevertheless, it is true that close-up experience of this excessive deforestation motivated a young forestry engineer and professor at the Interamerican Institute of Agricultural Sciences in the small town of Turrialba to start a family planning (FP) movement. As the Czechoslovakian-born US citizen professor Henry Tschinkel noted in an interview in 2007:

At the time (1960s), the country had the highest rates of demographic growth in the world. Everywhere you could see the destruction of the forests by cattle and agriculture. It was obvious that there wasn’t any forest future without controlling such very rapid growth.” 1

Indeed, the population growth was exceptionally high, 3.8% annually between 1955 and 1960, and the total fertility rate was between six and seven children per women. What also impacted and motivated our key figure to jump into action was that poor, rural people stated clearly that they did not want to have more children while, at the same time, there were no FP clinics providing contraception.

As a result, Tschinkel smuggled the first IUD (a so called Zipper ring) into the country in 1963, and the grass root FP program started operating locally. A few years later the Costa Rican Demographic Association (ADC) was founded, and started spreading contraception nation-wide.

An interesting feature about the very beginning of the FP program in Costa Rica was the participation of different Cristian churches. At the same time as the environmentally motivated grass-root movement in Turrialba, the Evangelical Costa Rican Alliance organized “Good Will Caravans“ and offered contraceptive advice and vasectomies to residents in remote rural areaa.

The host of the program, an Episcopalian minister named Padre Carlo, answered questions about sex, pregnancy and planning for children. 40% of the adult population (half of that men, most of them poor and rural) listened to the Christian minister openly discussing sex in the show. Research concluded that Dialogo effectively increased the knowledge of FP, while the positive attitude towards it helped break the taboo of talking openly about sex and using contraceptives.

As a consequence, the listeners were more likely to adopt contraception.

It is important to point out that Costa Rica has never had a formal population policy aiming to reduce births rates, although from the late sixties there was a strong governmental effort to provide the population with contraception and sexual education.

Proving the state’s commitment, the Office of Population was created at the Ministry of Health under a conservative Catholic president, José Joaquín Trejos Fernández, and contraceptives started to be formally offered at the institution’s health dispensaries.

As a result, Costa Rica has undergone a rapid decline in fertility, primarily due to the government-publicized program, that increased contraceptive use in both the private and public sectors, where assistance was directed to low-income families.According to a UN report from 2018, Costa Rica currently has the highest contraceptive prevalence rate in Latin America and the Caribbean (79.9%, modern contraceptive methods).

Since the late sixties, Costa Rica also has had the lowest total fertiltiy rate (TFR) in Central America.

Although birth rates plummeted after 1960, population momentum and increased longevity kept adult population and the number of households exploding at rates well over 2.5% per year until 1995. 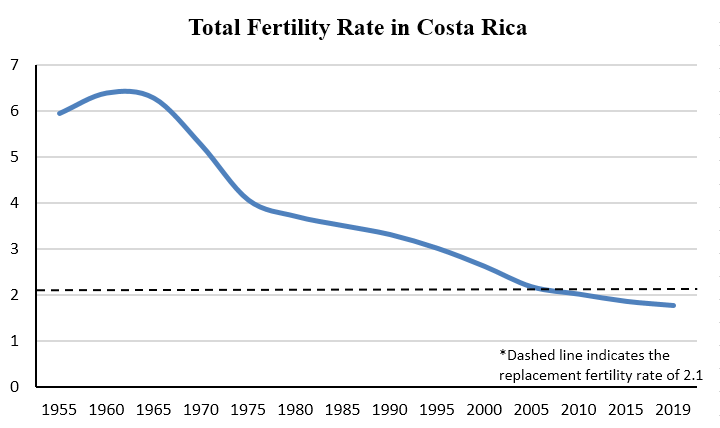 Two decades after Tschinkel’s concern about deforestation led to him starting the FP movement, Costa Rica implemented strong protection policies, making it the first tropical country to have stopped and reversed deforestation. It pioneered in developing a strict biodiversity law in 1998 embracing conservation of biodiversity, sustainable use of resources, and the fair and equitable sharing of the benefits arising from the utilization of natural resources.

The country introduced payments for Ecosystem Services to farmers and other land managers to achieve conservation, and also invented and developed ecotourism in the 90’s so strict nature protection became very profitable.

In addition, Costa Rica now is leading the world in clean energy production as 98% of its electricity is derived from renewable resources (mostly hydropower) and recently set the ambitious goal of carbon neutrality by 2050.

Adding to the social aspect of the country’s success, the infant mortality rate is half the average for Latin America and life expectancy (79.8 years) is comparable with many much richer countries – higher than in the US since the 80’s. This is due to one of the most effective primary health care systems in the world, covering almost every citizen.

Relatively high education levels have been achieved by introducing obligatory education already in 1886 and by high education spending (8% of GDP, while the global average is 4.8%). The combination of high wellbeing and a good state of nature gave Costa Rica the top rank in the Happy Planet Index three times in a row.

Nevertheless, Costa Rica’s success story has not created utopia. Although the country has made major socio-economic progress, more efforts are needed to reduce inequality, poverty and crime.

The Global Footprint Network also shows a growing ecological deficit due to declining biocapacity. Many people ascribe most of Costa Rica’s success to reallocating its military budget to health, education and pensions, after a constitutional abolition of the army in 1949. While the factors leading to countries’ successes are numerous, I would like to highlight that absent the FP efforts described in this article, Costa Rica could hardly have succeeded as much as it did.

This is illustrated by a comparison with a non-family planning country from the region, Guatemala, where the decline in fertility and accelerated economic development happened later, delaying enrichment, whereas in Costa Rica, the focused FP efforts induced fast and steep TFR decline, followed by faster enrichment.

In the next decades, Costa Rica is expected to transition into an ‘aged society’, and the dynamics of health care and pensions will have to adapt to this new reality. Will families and institutions be ready? Hopefully yes, if they keep up the good work they are doing and remain proactive.

Article is by Patricia Dérer, a researcher at Gothenburg University, Sweden, Department of Biological & Environmental Sciences. Patricia and her team – The Overpopulation Project – are researching the history and reasons of sustainable development, and recently wrote about Costa Rica’s environmental and social success story, finding interesting facts from the 1960’s.

QCOSTARICA - The government announced this Friday afternoon that...
Trends