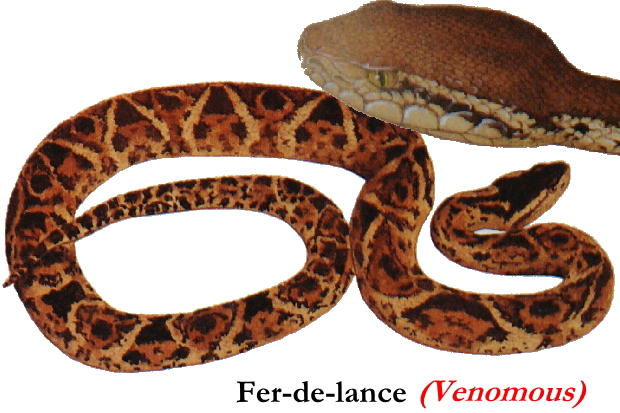 The Fer-de-Lance (Terciopelo) in Costa Rica:

Habitat
Widely adapted and common, the terciopelo is no stranger to lowland moist and wet forests and premontane moist, wet, and rainforest. It is less common through dry forest zones, although it may persist along rivers through such forest. In human-controlled areas where rat populations have done well, this viper is not shy. Banana plantations are a particular haunt of the terciopelo because of their rats.

Range
In Costa Rica this species is common along the lowlands of both coasts up to 1,300 m in elevation. Beyond this country, it can be found on the Pacific coast from some parts of Mexico down to Ecuador; on the Atlantic coast, down to Colombia.

Physical Description
This snake can grow to a large size as an adult, but has a distinct coloration pattern both as a juvenile and adult. Pale yellow or cream-colored bands crisscross the back and sides of the body, making spaces for a dark diamond pattern. The luster of these dark triangles is velvety, and the triangles connect slightly on the back which some describe as a butterfly or hourglass pattern. The head is large, triangularly shaped, and conspicuously wider than the neck. This pit viper has the deep, visible, heat-detecting pit between each eye and nostril. The eyes are large and have a vertical pupil. The scales along the head and back are keeled.

Biology and Natural History
This infamous viper’s large size, long fangs, and high venom production and toxicity are paired with an active and edgy disposition, making it one of the most dangerous creatures one can encounter in Costa Rica. It is the most dangerous snake in Central America and causes the most snakebite-related deaths among humans in Costa Rica. Venom from this species contains an anticoagulant and causes hemorrhaging.

This nocturnal serpent is more active on the ground as an adult, but as a juvenile may function during the day and on low vegetation. Younger terciopelos have a yellow-tipped tail to draw the attention of frogs or lizards before ambushing them. Prey size increases as the individual snake grows larger. It is common in this country, and commonly encountered. It passes the day coiled up and hidden in vegetation; at dusk it will hunt along roads or trails through dense grass and forest. It is not afraid of human dwelling areas. When it feels agitated, the fer-de-lance may vibrate its tail—the buzz is audible—before striking. It moves quickly when threatened. Other large vipers are more inclined to escape when they feel attacked, but the terciopelo is more likely to strike. It produces a lot of venom, so it is less reserved with this defense as other snakes.

Female terciopelos give birth to live young (as opposed to eggs) in litters of fewer than 10 to larger than 80 small snakes at a time.

Diet
Juveniles prey on arthropods, frogs, lizards, or other small vertebrates. Adults upgrade their diet to small mammals, such as rodents and opossums, and occasionally birds of an appropriate size depending on the snake.

Height/Weight
The full length of this snake can be more than 2 m; females are able to reach slightly longer body lengths than males.

QCOSTARICA - Americans who have been vaccinated for at...
Guanacaste