Few Came Out To Say Their Goodbyes

Few friends and relatives came out to send off Matteo Quintavalle. The San Rafael Arcángel parrish, in Escazú, was practically empty on Monday afternoon. 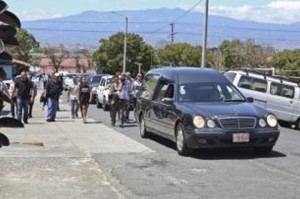 Keiner Quintavalle, son of the businessman and Marvin Hernandez, Quintavalle’s life partner (boyfriend), who carried a photo of the Italian, remained close to the coffin throughout the ceremony.

According to Hernandez, Quintavalle will be cremated and his ashes divided equally between he and Keiner.

“Matteo was a man of great heart, a very special person, he made people laugh easily. The Lucky was mine to have met him…”, Hernandez said in his euology.

The majority of the few who showed for the funeral told the media they were surprised of the news on Friday. Some knew of Matteo’s health problems, but of the extent.

Quintavalle died of a heart attack Friday moring, two days after Judicial agents raided his home and that of nine others. Authorities alleged that Quintavalle was the mastermind behind a land registry fraud of US$2 million dollars.