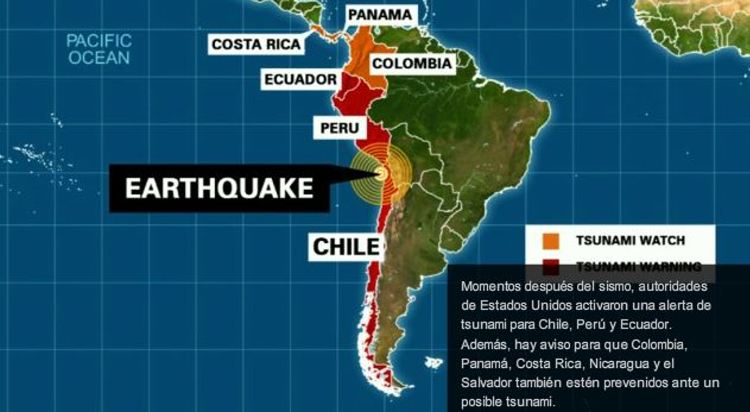 An 8.2 magnitude earthquake that struck off the coast of northern Chile, has generated aTsunami warning. The U.S. Geological Survey reported the quake, which hit at at 6:46pm local time, was centred some 100 km (60 miles) northwest of Iquique at a depth of 20km (12.5 miles).

In Pacific Tsunami Center included Costa Rica in the possible places to be affected by a Tsunami.

The National Oceanic and Atmospheric Administration (NOAA) notes that the arrival of a Tsunami in Costa Rica would be around 10:41pm in Matapalo, on the extreme southeast tip of the Osa Peninsula, Puntarenas.

The potential wave could the Santa Elen in Guanacaste at 11:31pm and Quepos at 11:14pm.

Costa Rica’s Red Sismológica Nacional (RSN) – National Seismological Network – says the information is preliminary and subject to confirmation of the existence of a Tsunami.

RSN geologist, Leplot Linkimer, said staff is constantly monitoring behaviour of the phenomenon and any changes would would be announced immediately.