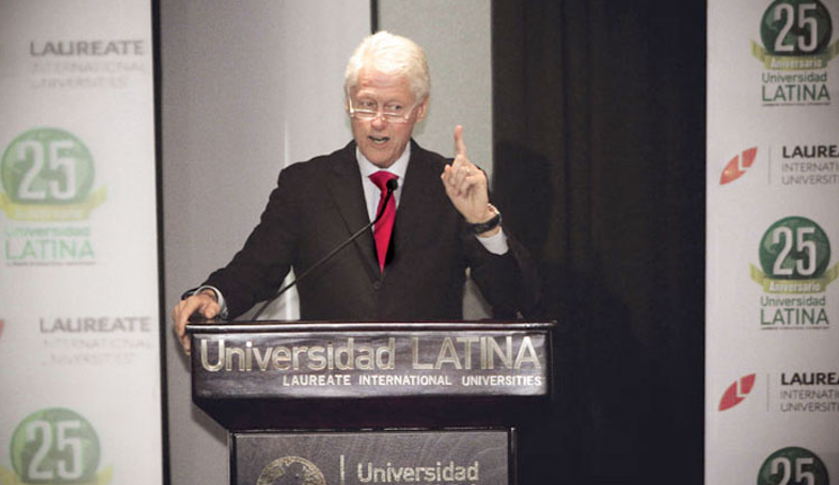 Clinton said that Costa Rica has the potential to generate energy through solar panels, plus the country has schools and clinics in all cantons that allow strengthening the population. “You (Costa Rica) can build a country based on knowledge,” said the former president.

During his visit, Tuesday afternoon to inaugurate ULatina’s Faculty of Medical Sciences, was well as part of the private university’s 25th anniversary, Clinton highlighted the country’s work in environmental protection and strengthening education.

Clinton spoke for one hour covering a number of subjects like environmental protection, education and world poverty. Also touched on by the former president was peace in Central America and that culture that prevails in Costa Rica.

Adding a little humour to his talk, Clinton quipped how today Keylor Navas would give president Luis Guillermo Solís – winning the elections last April with the most popular vote ever – a challenge in an election.

The former U.S. president make a call on all Latin American nations to “define the conditions of independence”, in relation to the peace negotiations between Colombia and the FARC.

Clinton said he was “optimistic” about the situation in the Americas and said “everything in life is a comparison between avoiding something bad happening and something good to happen.”

“Although like the World Cup where some lose and and others win, leaders of countries should find a formula for winning, for all its people to have better living conditions and reduce poverty,” said Clinton.

Clinton closed his speech with a call for “everyone do something”.

This is not the first visit by Clinton to Costa Rica. He visited the country on May 7 to 9, 1997, to attended a Summit Meeting of Presidents of the Central American Republics. During the visit he met with then president of Costa Rica, José María Figueres Olsen.

QCOSTARICA - Dr. Mario Urcuyo, an expert in the...
Uruguay