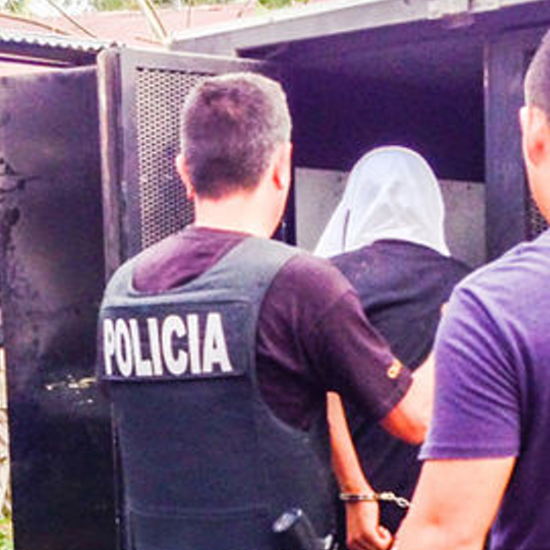 The first incident occurred about 4:00pm Wednesday (December 24) in Mabí de Nicoya (Guanacaste), when a man shot his wife, then killing himself with a knife.

The deceased woman was identified as Clara Vásquez Baltodano (45 years old) and her husband, 60-year-old, Leonidas Vega Vega. Neighbours told investigators they had heard a quarrel between the couple, ending with a gunshot.

A relative of the deceased entered the house and saw the woman lying on the floor, while her husband lay nearby with a knife embedded in his throat. Vega was taken to hospital, where he died later in the evening. According to the OIJ, the woman was a victim of spousal abuse for several years.

Judicial authorities said Baltodano had filed a restraining order, but the man continued in the house. On Wednesday she told her husband she was leaving him. Reacting to the news, the husband ended the argument by pulling the trigger on his 38 calibre gun and shooting his wife in the chest, then deciding to kill himself with a kitchen knife.

Young Man Slain
On Christmas Eve, around 10:30pm, a 17 year old died after being shot in Barrio Cuba (San José). The victim, surnamed De la Peña, died at the scene after being shot at close range.

Authorities do not have a motive for the homicide, nor any clues as to the assailant(s). The police report says the young man was with friends all afternoon. Later in the night, neighbours heard a gunshot, when they ran to see what had happened, they found the lifeless body of the teen.

Mortal fights
Two people were killed in fights during holiday celebrations.  In both cases, police were able to arrest the suspects in the killings.

One of the fights occurred Thursday at dawn in the area of Sagrada Familia (San José). The OIJ report the victim, Jason Herrera Cedeño, was 19 years old, shot several times following a discussion with three other men, when one of them pulled the revolver. The young man, hit in the abdomen and legs, was rushed to the San Juan de Dios hospital, where he died hours later.

The other fight occurred in Amubri, Talamanca (Limón), the victim 22-year-old Erick Hernández Porras, according to the OIJ report.

Apparently, the victim and the suspect had been drinking all evening Wednesday, when around 1:00am Thursday a fight broke out between the two, when one of them, the suspect identified as Dominguez Porraz, took out a machete.

Intended Robbery
The fifth reported murder, also in Limón, occurred in a banana farm in the area of Davao de Batán.

The victim, a plantation worker identified as 50 year old Sebastián Pérez Arista, was shot in the chest.

Local police say the man was cycling and apparently when he stopped to open the gate to the farm, he was attacked in an intended robbery.