Fixing sidewalks throughout the country remains adrift due to legal vacuum

Although the April law obliges all 82 municipalities to carry out works, they still have to regulate the construction and collection mechanism that will be made to all the residents of each canton 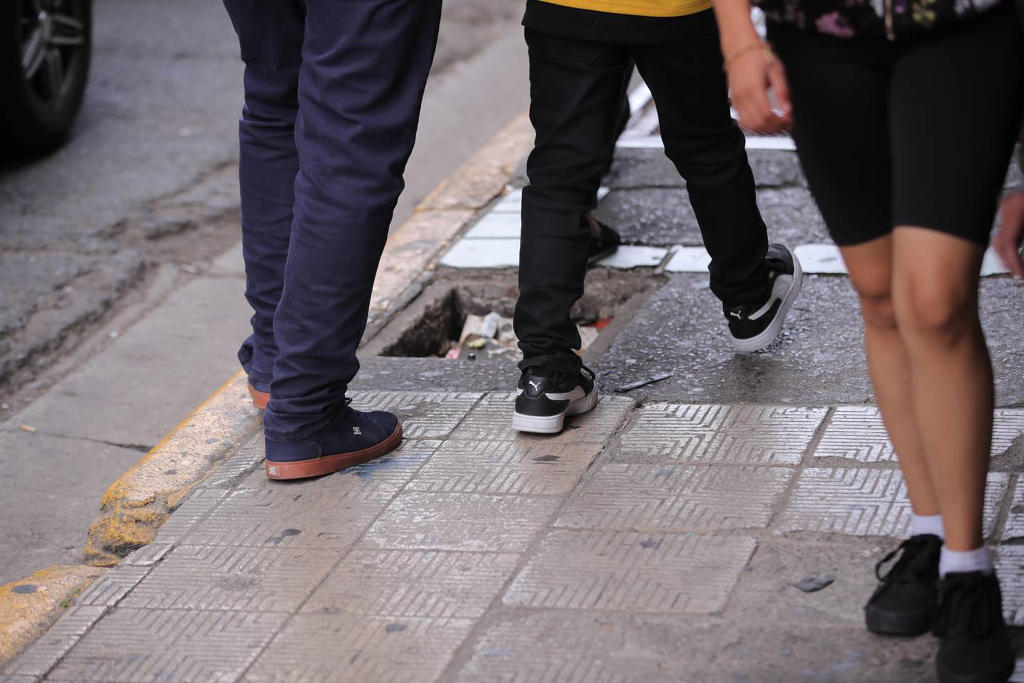 QCOSTARICA – Many sidewalks, where there are, across the country are a hazard zone. Some of the worst of the worst are in the Calles and Avenidas of the downtown core of San Jose.

Over the years there have been reports of people get injured, even falling into holes, some a foot or more deep smack in the middle of the pedestrian walkway. For the most part, in Costa Rica we are used to it, many will just shake it off, make a mental note of the location and remember to be more careful the next time.

For the elderly and the disabled, a small misstep can turn into a nightmare.

Though some municipalities have been making a concentrated effort to better the situation, the years on top of more years of neglect and outright abandonment, means they are just playing catch up.

As of April 2021, a law went into effect where owners are no longer responsible for keeping the sidewalks in front (or side) of their property, transferring the responsibility to the 82 municipalities and the Ministry of Public Works and Transportation (in the case of national roads)

However, the law, Ley de Movilidad Peatonal (Ley No. 9976) – Pedestrian Mobility Law – approved in March 2021 and published a month later, gave the local governments and the MOPT 18 months to regulate “the corresponding maintenance, rehabilitation and construction works” in a transitory phase.

This implies that, during this period, while each of the 82 municipalities defines how much, and to whom it will charge, there is no obligation to attend to carry out works.

The municipalities also have between 18 and 24 months to prepare and approve the cantonal plans for sustainable mobility in their cantons. These plans will define which sidewalks and areas will be served first and under what models they will do so.

In accordance with the legislation, the municipalities must carry out an annual calculation for the maintenance, rehabilitation and construction services of the sidewalks, which considers “the effective cost invested”. From there, local governments will charge rates that will be set taking into account that cost plus a 10% profit to develop them.

In addition, this sum will be collected “proportionally” among the taxpayers of each district where the works are carried out. This calculation must also include what is necessary to cover those cases where, exceptionally, the owner can demonstrate that he does not have the money to pay the rate.

According to Raúl Jiménez, Advocacy Advisor for the Union of Local Governments, although the law does not specify it, it was agreed that the rate will be defined by linear meters of each property. However, each municipality can create its own formula to calculate that rate, which will be the same whether it is a home, a grocery store, a supermarket or an office complex. What is clear is that the percentage will be different from one canton to another.

The Law also empowers the municipalities so that in the first years they take resources from the care programs of the cantonal road network and apply them to the sidewalks. However, lack of regulations has caused confusion and in many cases, no work being carried out.

In December 2021, the Union of Local Governments (UNGL) sent to the 82 mayors, intendants and municipal councils a prototype regulation that contemplates the main parameters that each one of the municipalities should consider making the legislation effective.

The model presented by the UNGL defines the inspection processes, how the care of the sidewalks in each canton would be prioritized, the responsibilities of the owners and what would happen in the event that they make modifications or alterations to these infrastructures.

Alcade Diamante: the Most Infamous Politician of the ‘Simpsons’