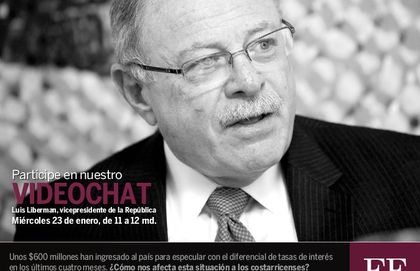 The government is seeking congressional approval to raise deposit requirements on investors and boost taxes on interest paid abroad after inflows rose as global investors search for higher yields, Liberman said in an interview yesterday in San Jose. The measures are designed to be temporary, he said.

“It’s too much, too fast,” Liberman, who heads President Laura Chinchilla’s economic team, said. “Because of the size of the country and the current international economic conditions where interest rates in some of the developed countries are so low, we need to put these measures in place.”

Costa Rica’s moves came after currencies in Poland, Romania and Colombia reached their strongest levels this month since at least February 2012. Russia’s central bank warned Jan. 16 that the world is on the brink of a fresh ‘‘currency war.”

Costa Rica’s currency, the colon, has gained 1.4 percent against the dollar this year through yesterday, trailing only the Brazilian real and the Guyanese dollar among 20 Latin American and Caribbean economies tracked by Bloomberg. The colon was little changed at 501.14 per dollar at 1:11 p.m. local time.

International Reserves
The entrance of speculative capital into Costa Rica, where the interest rate on deposits is 8.6 percent, has forced the central bank to purchase more than $1.5 billion in the last 10 months to stabilize the colon. That hasn’t cut into central bank reserves, which have reached $7.1 billion this month from $4.6 billion a year ago.

“Costa Rica is attractive,” Liberman, 66, said. “Our economic growth was 5 percent last year, which is very stable, and inflation of 4.5 percent, which is very low.” 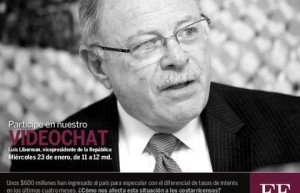 Liberman also said that Costa Rica’s “crawling band” currency system, which allows the colon’s value to fluctuate daily between a fixed ceiling and floor, will eventually be abandoned by the central bank.
Crawling Band

“No country has a permanent system of having a ceiling and a floor always,” he said. “When is the optimal moment to move away from that system? That has to be decided by the central bank.”

The Finance Ministry will announce ideas for a new fiscal consolidation plan as soon as March in an attempt to pare the country’s budget deficit, estimated at 4.5 percent of gross domestic product, Liberman said. The plan will increase tax collection and reduce spending in hopes of narrowing the gap by 3 percentage points prior to the start of a new government in 2014.

“It is an act of political responsibility to try to find a long-term solution to this issue,” he said. “Leaving a fiscal deficit of 1.5 percent of GDP is very manageable.”