Foreign Journalists Not Welcome in Venezuela

TODAY VENEZUELA (Paris, France) – Reporters Without Borders (RWB), or Reporters Sans Frontières (RSF) has called on President Nicolas Maduro’s government to stop blocking the international media’s reporting in Venezuela. In recent months, the obstruction has included expulsions, the seizure of material and equipment, and outright censorship.

They were quickly arrested by the Servicio Bolivariano de Inteligencia (SEBIN), the Venezuelan government’s intelligence and counter-espionage agency, were held for ten hours and were subjected to several heavy-handed interrogation sessions in which they were called “state terrorists” and were threatened with being imprisoned “forever.”

“I felt like a prisoner, like a criminal,” Stoliar later said, after their material had been seized and they had been sent back to Brazil, via Peru. 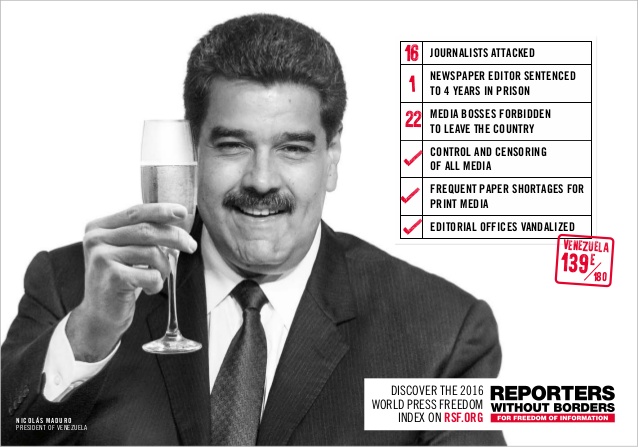 Journalists turned back on arrival

More than 20 journalists and media workers of at least nine different nationalities have been denied entry at Maiquetía international airport (20 km north of Caracas) since last August. The official grounds have been violation of immigration regulations and other bureaucratic pretexts.

Most of these expulsions have occurred in the days preceding the major street demonstrations that the opposition has been organizing in Caracas.

In the run-up to a big protest on 1 September, five Al Jazeera TV journalists, including Teresa Bo, Lagmi Chávez and John Holman, were expelled the day after they arrived. Marie-Eve Detoeuf, a reporter for the French daily Le Monde, was told that she was “non-admissible” because she did not comply with immigration rules.

Colombian journalists César Moreno of Radio Caracol and Dora Glottman of Caracol TV, and US reporters John Otis of NPR and Jim Wyss of the Miami Herald also suffered the same fate.

Rodrigo Abd, an Argentine photographer with the Associated Press, was also denied entry the same day.

Joshua Partlow, a reporter with US and Canadian dual nationality working for the Washington Post, was denied entry a few days later on the grounds that his work visa was not in order, although he had visited Venezuela repeatedly during the preceding months.

When Bernard de la Villardière, a French reporter for the M6 TV channel, arrived on 11 December with a five-member crew (four French journalists and a Swiss cameraman) to do a report on daily life in Caracas, they were escorted back to their plane without explanation. As their press visa applications had been refused, they had come on tourist visas.

Finally, Aitor Sáez, a Spanish journalist working for German public broadcaster Deutsche Welle, was expelled on 22 January without any explanation.

“We find it hard to believe that all these foreign journalists were expelled simply because they failed to comply with the bureaucratic requirements,” said Emmanuel Colombié, the head of RSF’s Latin America bureau.

“The lack of grounds or inconsistency of the reasons given by immigration officials for denying access creates a climate of uncertainty and constitutes a threat to freedom of information. In the grave economic and political crisis that Venezuela has been experiencing for more than a year, the work of journalists, and especially foreign journalists, is vital and should not be blocked by the Venezuelan authorities on any pretext.”

Humberto Márquez, the head of the Foreign Press Association (APEX), told RSF that airport officials often act “in a discretionary manner.” Sometimes they object to the lack of receipts for professional equipment. At other times, they say that Venezuela’s ministry of communication and information (MINCI) was not notified by the consulate of the journalist’s country. All official information about foreign journalist accreditation is available on the MINCI website.

The lack of a receipt was used to expel Kay Guerrero, a US-based Venezuelan journalist working as a producer for CNN, when she arrived with her cameraman, Peter Kavanagh, on 28 August, just three days before the big protest on 1 September. Their equipment was seized on arrival at the airport and the only way for them to recover it was to leave immediately.

A chain reaction from the Venezuelan authorities ensued when CNN en Español broadcast a major report on 6 February about an alleged passport-for-cash racket operated out of the Venezuelan embassy in Baghdad that implicated Venezuelan Vice-President Tareck El Aissami.

Maduro publicly accused CNN on 12 February of “manipulating” the facts and of waging a propaganda war against his country. He added: “CNN, get out of Venezuela, get out!”

This act of censorship was widely condemned by the Venezuelan media. It was also criticized by the Organization of American States, which called it an attack on freedom of expression, democracy and the Venezuelan people’s right to information.

RSF points out that, back in December 2015, foreign reporters who wanted to cover that month’s parliamentary elections had to sign a good conduct pledge to avoid the withdrawal of their accreditation.

Venezuela is ranked 139th out of 180 countries in RSF’s 2016 World Press Freedom Index.

QCOSTARICA - In times of pandemic, things change constantly, especially when it is necessary to tighten the belt to reduce the contagion of covid-19. The...
Quepos