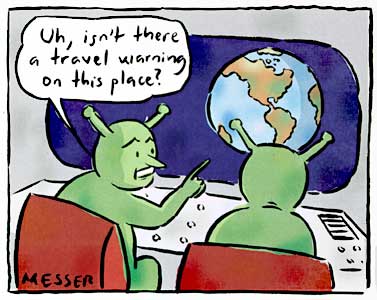 When traveling to a foreign country, how much attention do you pay to travel advisories issued by your government? For example, if you follow the news releases published by the Ministry of Foreign Affairs in Costa Rica, you would know that travel to Syria at this time is absolutely not recommended. 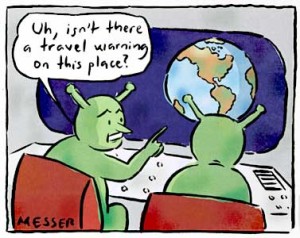 Costa Rica does not publish travel warnings per se, although officials from the Ministry of Foreign Affairs will answer questions and consult with their fellow officials who are assigned to embassies and consulates abroad, even when the representation is a bit lean. For example, the sole point of contact with the General Consul of Costa Rica in Beirut, Lebanon is a Hotmail address.

Travel alerts are very much in the purview of G-20 nations that share Anglo-Saxon ancestry. Country-specific warnings and advisories issued by this rich, powerful nations can be a hoot to read due to their overly dramatic tone that often borders on the tragic. An online travel website that puts it more succinctly is ReidsGuides.com:

“Travel warnings, [U.S.] State Department advisories, travel advisories, and other official scary documents [seem to be] designed to leave the impression that the boogeyman lives in your chosen vacation destination.

Every time I read State Department travel advisories […], they start making any place sound like a terrifying death trap, and Missouri starts sounding nearly as unfriendly as Myanmar.”

So how does a peace-loving, army-less and democratically stable nation such as Costa Rica fare in the travel advisories of big and mighty countries such as Australia, Canada, the United Kingdom, and the United States? Let’s find out, and keep in mind that the excerpts below are from government agencies in their respective countries:

We advise you to exercise a high degree of caution in Costa Rica because of the high risk of serious crime. Pay close attention to your personal security at all times and monitor the media for information about possible new safety or security risks.

The incidence of violent crime including armed robberies, carjackings, home invasions and gang muggings in Costa Rica remains significant. ‘Express kidnappings’, where individuals are abducted and forced to withdraw funds from ATM machines to secure their release, are common.

Canada – “be vigilant at all times”

Foreigners have been sexually assaulted at beach resorts as well as by taxi drivers in San José.

As incidents of sexual assault sometimes involve the use of sedative drugs, avoid leaving your drinks or food unattended in bars and nightclubs. Consult our publication entitled Her Own Way: A Woman’s Safe-Travel Guide for travel safety information specifically aimed at Canadian women.

Don’t wear jewellery or carry large amounts of cash. Take particular care of your belongings in hostels and hotels. Lock valuables in a hotel room safe. Don’t use street money-changers.

Avoid using unofficial taxis – ‘taxi piratas’. Violent incidents involving tourists have been reported. Official taxis are red with a triangular sticker and plastic box on the roof with the name and number of the taxi company.

Violent attacks including rape and other sexual offences are rare but there have been some in recent years.

The United States of America – “There have been no recent acts of terrorism in Costa Rica.”

The incidence of crime in Costa Rica is higher than in many parts of the United States and has adversely affected the traveling public. Pickpocketing and theft remain the most common crimes perpetrated against tourists, with theft from vehicles or on buses being particularly frequent. U.S. citizens also have been the victims of violent crime, including sexual assaults, robberies, car-jackings and murders. Armed robberies can occur even in daylight on busy streets.

Engaging in high-risk behavior, such as excessive consumption of alcohol or drugs, can increase the vulnerability of an individual to accidents or opportunistic crime.

If reading the travel advisories above make you question your visit to Costa Rica, please keep in mind that the world, for lack of better words, has always been a big, scary place. Focus on the negatives of the advisories as illustrated above, and you will end up never getting to know Costa Rica. Besides, imagine the scary list we could come up with by simply scanning the crime headlines of the newspapers in the countries above? Why, a tourist reading the police blotter of Baltimore alone would never visit the U.S., fearing that he or she might run into Omar Little from The Wire.

When it comes to traveling to another country, keep in mind that, in all likelihood, people very similar to you have managed to live, love and survive there for centuries. Bad stuff happens to them, as it can happen to you if you stay in your country. In this sense, keep in mind the wisdom of the great U.S. author John Steinbeck, who once wrote:

“A journey is like a marriage. The certain way to be wrong is to think you control it.”