Before World War II, almost 75 percent of Costa Rica was covered by forest land. What happened in the next four decades was particularly damaging to the national ecosystem: The national forest coverage decreased to 21 percent. 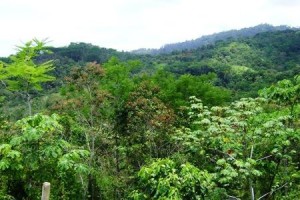 In just 33 years, from 1950 to 1983, more than 46 percent of forest land in Costa Rica was lost due to lack of reforestation efforts. In the next 27 years, however, tree planting and forest conservation activities have managed to reclaim 26.3 percent of the lost forest areas. This amounts to a 52.3 percent forest density in Costa Rica as of 2010.

The figures above, cited by Cristina Mora Jiliuta of Amelia Rueda’s online news and discussion site Nuestra Voz (Our Voice), come from research performed by Ministry of the Environment (MINAE in Spanish) and the National Forestry Financial Fund (FONAFIFO) in Costa Rica.  The deep deforestation during the World War II and Cold War periods coincided with mass farming of coffee, sugar cane, and Africanized palm for cooking oil purposes.  These cash crops are quite lucrative; in fact, they are routinely traded as commodities on Wall Street.

Another cause of deforestation in Costa Rica was the lumber industry and the irresponsible clearing of acres upon acres of primary forest by logging interests. By 1987, it was clear that without decisive government intervention, Costa Rica’s forest would suffer the destructive fates dealt to countries such as Haiti and Nicaragua.

These days, however, MINAE and FONAFIFO have managed to reclaim a good portion of the forest land lost thanks to programs such as Payment for Environmental Services Program (PSE in Spanish) and the Strategy to Reduce Carbon Emissions Caused by Deforestation and Forest Degradation (REDD+ in Spanish).  The PSE program has been particularly effective in this regard since it encourages participation of land owners.  The Costa Rica Star has previously written about this program, which can put cash in the pockets of land ownerswhose properties have portions of forest land.

Figures recently released by MINAE and FONAFIFO include a forecast for reclaiming up to 70,000 annual hectares in the next few years, with the ultimate goal of seeing Costa Rica’s forest coverage up to 60 percent.  This is in line with the Costa Rica – Carbon Neutral initiative that is expected to take effect in the year 2021. According to the United Nations Department of Economic and Social Affairs, reforestation is the easiest way to combat climate change.