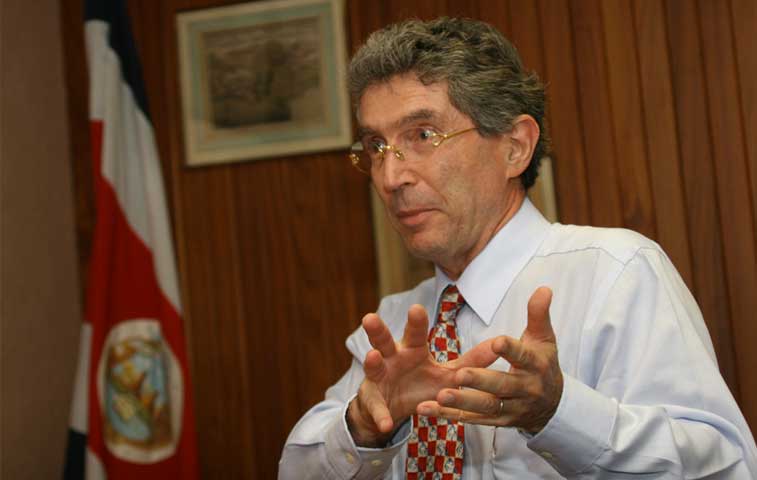 QCOSTARICA  -Former  Environment Minister Roberto Dobles has been sentenced by a Goicoechea court to three years in prison for his role in the ramming through of the permits to allow the Industrias Infinito company to work the Las Crucitas open pit gold mine.

Although the mine was potentially tremendously lucrative — literally a gold mine — a series court actions blocking establishment of the mine ensued, brought by residents of the mine area and environmentalists. At the time the permits were issued, then-President Oscar Arias (2006-10) had designated the mine as “in the public interest.”

However, Dobles will not go to prison because the court, specializing in white collar crimes, suspended his sentence. The court found that Dobles had issued the “public interest” decree illegally and had, moreover, allow the environmental agency Setena to pass the mine without an environmental impact study.

The trial, in which Dobles was the best known figure of seven defendants, began Oct. 27 and heard 27 witnesses. The prosecution asked for a dozen years prison time for illegally favoring the Canadian gold mine company. Since that happened, Infinito has been in courts, fighting for the permits.

After the Arias term was over, his successor, President Laura Chinchilla, issued a decree banning open pit mines. Moreover, belatedly, studies by the Environmental Ministry determined that the firm had caused grave damage to the natural setting of the mine with wanton deforestation.

The defendants were tried under the “prevaricato” articles of the Penal Code which specify public servants taking action in defiance of the law, punishable by two to six years of prison. Even before Chinchilla’s ban on open pit mining, a court cancelled in November of 2010 the permit to work the mine at Cutris.

While this decision stopped the mine development at this point, it still did not shut the door to the mine being reactivated. Since then, Infinito spent many days in court finally suing for recompense for the initial investment in developing the mine. Currently, the company is seeking international arbitration.

The original permit issued by Dobles’s instructions allowed Infinito use of 192 hectares along with permission to cur trees while still protecting water resources. Attorney for the defense, Laureano Castro told La Nacion that he intends to appeal after study of the decision.

Comment: After the mishandling of evidence in the trial of the murder of environmentalist Jairo Mora and the loud protest internationally at the release of seven defendants, the granting Dobles a suspended sentence is bound to cause more questions of whether this country is serious about protecting nature.

QCOSTARICA - The prestige of the company of some of the richest men in Costa Rica hangs by a thread. For many, the MECO...
Rico's Digest

Today, Sunday, June 20, only vehicles with "EVEN" ending plates CAN circulate The measure is countrywide and applied between 5:00 am and 9:00 pm, save...
Politics